The seven trams currently under the auspices of the Fleetwood Heritage Leisure Trust – most stored in Wyre Dock with one currently at Rigby Road Depot – are on the look out for new owners after the Trust announced their intention to disband after admitting defeat in their efforts to create a viable tourist attraction in Fleetwood.

In a statement on their website the Fleetwood Heritage Leisure Trust said: “After a decade of sustained effort ably supported by professionals in planning and design, the aims of realising a viable heritage visitor attraction in Fleetwood at Wyre Dock are still unfulfilled. With the added concerns posed by a global pandemic ever present – and outline proposals by Wyre Dock’s landowner, ABP, to redevelop their waterfront site and former dockside land – the FHLT have decided to call it a day on continued labours as far as a heritage transport display in Fleetwood is concerned.”

The Trust are the custodians of seven trams and these are to be disposed of this year with the statement confirming that there is already interest in some of the vehicles with and the hope is some may be put on display in the Fleetwood area. As well as the trams they also rescued the Sub Station control panels from Copse Road Depot before its demolition and these too are hoped to be put on display.

The Fleetwood Heritage Leisure Trust started off life as the Friends of Fleetwood Trams with a lot of enthusiasm and good intentions to save a number of Blackpool trams upon its upgrading and the hope of creating some form of visitor attraction in Fleetwood. A number of different plans have been considered, including the use of the former Copse Road Depot which was ultimately demolished before their sights turned towards redevelopment at Wyre Dock. But with these plans seemingly no further forward they have now accepted that they are unlikely to come to fruition.

The trams which are currently under their custodianship are:

Centenary 641 (stored at Wyre Dock having previously been on display at Pleasure Beach where its trolley tower remains!)

With the exception of 290 these trams have been stored out in the open for many years and recent photos which have been circulating on social media have shown that these conditions have not been that kind to the condition of the trams.

Going back to the FHLT statement and they have confirmed that they have already had expressions of serious interest for Brush 290, Railcoach 678 and Balloon 710 – all of which have particular historic interest. The Brush Car was the last tram to run on the North Station route and the last tram to run from Fleetwood Ferry in the traditional tram years, 678 is the most traditional of the three ex-Towing Cars and 710 is infamous for killing Alan Bradley in Coronation Street!

The Trustees of the FHLT are said to be in discussions to allow two or three trams to remain in Fleetwood and this may also see the Sub Station control panels included somewhere in Fleetwood.

The FHLT burst onto the scene upon their acquisition of Balloon 710 which featured at Tram Sunday in 2011, running along the street on the back of a low loader. They also displayed Brush 290 (in three different liveries) and Centenary 641 (in two liveries) alongside Pleasure Beach loop as part of the illuminations for several years. Other achievements included the securing of Jubilee 761 for preservation which has since become part of the Fylde Transport Trust collection and Centenary 643 was converted into a classroom for a school in Rugby.

The news of the disposal of this collection comes quickly after the reporting that a number of privately owned trams currently stored at Rigby Road Depot would be asked to move early this year. It seems that with the 10th anniversary of the closure of the traditional tramway coming this November that several organisations are now taking the chance for a reassessment of those Blackpool trams which survive to see what can be achieved in the coming years. It does seem unlikely that all the trams will survive but hopefully what we all end up with is a secure future for those that do. 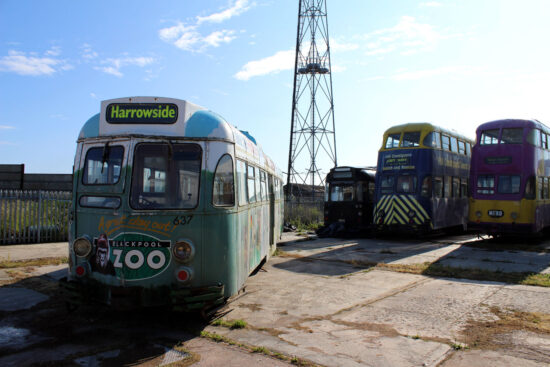 The long term home of many of the trams has been a secure open compound at Wyre Dock. This view is from 20th June 2015 and shows some of the trams then stored there. Brush 637, Railcoach 678, Balloon 726 and Balloon 710. 726 has since headed to Rigby Road but the others remain in situ but with a further almost six years of outside storage their condition has deteriorated. 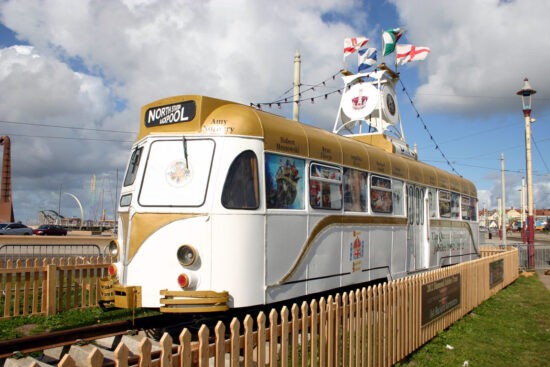 The first of the FHLT trams to be displayed at Pleasure Beach was Brush 290 which initially received this livery celebrating the Queen’s Diamond Jubilee in 2012. This picture is dated 19th September 2012. 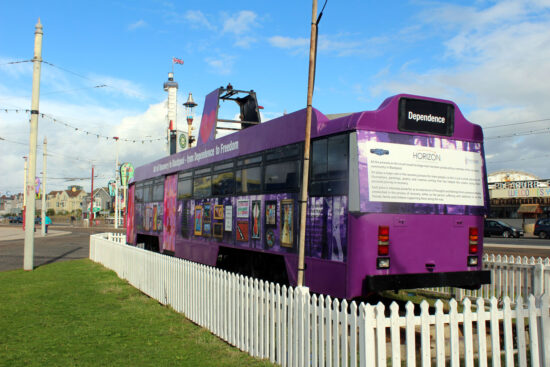 Centenary 641 was the second of the trams at Pleasure Beach and is seen here on 21st September 2018 when carrying the purple based livery which included art from the Art of Recovery scheme. (All Photographs by Gareth Prior)

24 Responses to Fleetwood Heritage Leisure Trust collection to be disbanded