Around the World in Trams: Den Haag 5013

Today “Around the World in Trams” is again taking a look at the extensive system in Den Haag.

Last time out we described the first of two different types of trams which operate the Den Haag system and this time out we take a look at the second type – the Siemens Avenio. These were introduced from 2015 and are four section double ended low floor trams. They are operated by HTM but carry the grey with red relief that is the livery of R-net, the branding for the main high quality and high frequency road and rail routes across the Randstad, the metropolitan area that extends from Amsterdam to Rotterdam and Den Haag.

On 3rd July 2017 we see three of these Siemens Avenio cars – led by 5013 – on the sandy tracks of Scheveningen Noorderstrand turning circle. Trams on route 9 either ran through to the De Dreef terminus in Vrederust, south west of the city centre, or terminated short at Centraal Station. 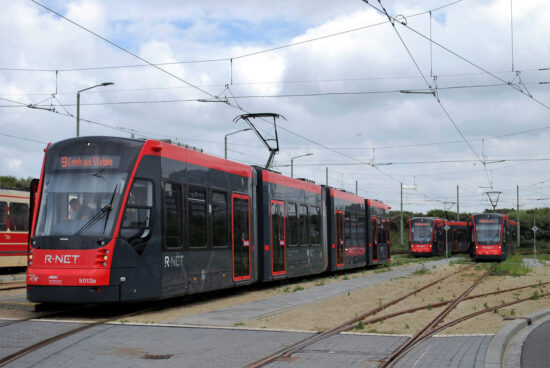 2 Responses to Around the World in Trams: Den Haag 5013