Today we are off “north of the border” again for another entry into “Still Standing!” where we take a look at a small remaining section of the old depot complex on Leith Walk, Edinburgh.

Of course, Leith Walk is very much in the public eye for trams again now with the Trams to Newhaven project serving this area but back in 1905 a depot was opened here by Leith Corporation Tramways to house their trams at a time when they were just electrifying their system. Originally a nine track facility it was expanded in 1937 with a further three roads added by which time it was under the control of Edinburgh Corporation Tramways. It was at this time that the section which remains to this day – the office block – was added. The entire complex remained open to trams until the end of the original network on 5th May 1956. The depot then remained in use by buses until the mid-1970s and was still standing until demolition came two/three years ago but the offices remained and are now the Leith Walk Studios. 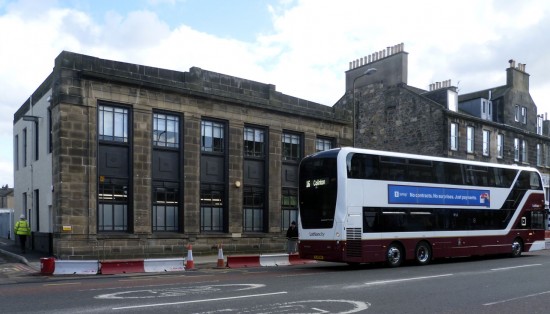 This photo shows one of the extra long buses in use by Lothian Buses on the route 11 and 16 to and from Newhaven Pier Place passing the old office block. Trams used to enter the depot either side of this block and in both directions. (Photograph by Roy Calderwood, 19th March 2020)