Whatever Happened To? Blackpool Balloon 713

Our series where we take a look at those trams which operated in Blackpool over the last weekend of traditional tram operation continues today and we have now reached Balloon 713.

As with many of the trams which ran over the weekend – by this time there wasn’t a great deal of choice in trams let’s be honest! – 713 was in action on both days. Saturday 5th November saw the car out for the evening service (running between Pleasure Beach and Little Bispham) whilst the very last day also saw it running on that very same service. It was at around 2315 on Sunday 6th November that 713 would depart from the Prom and return to the depot but with its door modifications already in place it was expected it would have a positive future.

713 ended its traditional tramway career with an advert for the Houndshill Shopping Centre and move forward to 2020 and that is exactly what livery it still has! Whilst the intermediate service the “B fleet” cars were expected to operate hasn’t ever transpired to the extent it was thought it would, 713 has still seen use most years although this use has been more often than not as an extra heritage tram. When it does run on the heritage service it is often popular with enthusiasts and is in the only full advert livery which runs semi-regularly (considering the livery on 642 to be partial as it still has green and cream ends!) 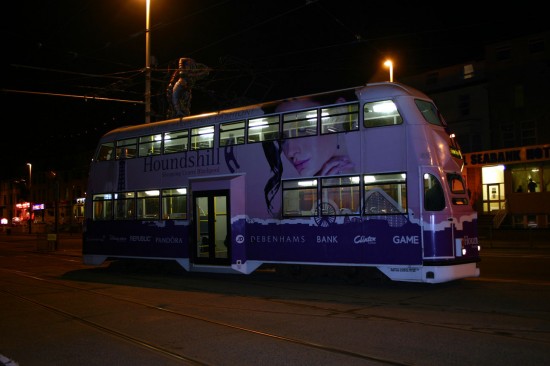 It’s day over on 6th November 2011 and 713 is just about to head across the Prom for one last time on the traditional tramway. 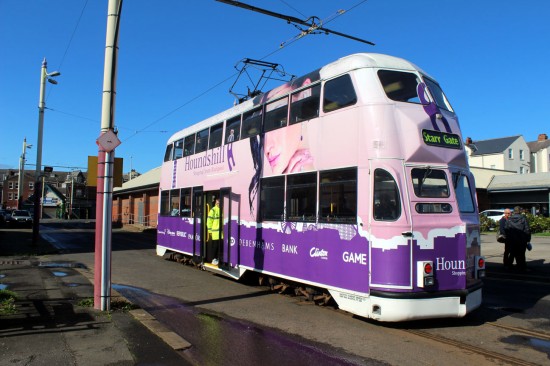 Down outside the depot on Hopton Road and 713 was allocated to the depot shuttles (between Rigby Road and Starr Gate depots) on 28th September 2019. (Both Photographs by Gareth Prior)