Posted on Thursday 16 March 2017 by Gareth Prior

In today’s offering from the archives we head to Blackpool for a enthusiasts tour on a foggy 29th November 2008. The occasion was a farewell for Ex-Towing Railcoach 679 which had been acquired by the Lancastrian Transport Trust for restoration in original condition and it was joined on the day by Coronation 304.

Railcoach 679 was originally built by English Electric in 1935 and operated in this condition – as 279 – for 35 years before it was withdrawn in 1960 ahead of conversion into a Twin Motor Car. In this condition it returned to service in 1961 being renumbered as 679 in 1968 but unlike the first seven numbered Twin Cars it was never to be permanently coupled with its trailer and it ended up as a member of a sub-class of three which ran singly. It became the first of this sub-class to be withdrawn from service – as part of the “great mothballing” at the end of the 2004 season – and was acquired by the Lancastrian Transport Trust who were, at the time, rapidly increasing their tram collection. The intention was that it would be restored to original English Electric Railcoach condition but before it left Rigby Road for Brinwell Road it ran one final tour on 29th November 2008 alongside fellow LTT car Coronation 304.

It is on that date that these photos were taken in ever increasing fog, either adding to the atmosphere or making photography more difficult depending on your point of view! We first find 679 at Thornton Gate, which for most of the day was the northern terminus for the tour until the last run to Fleetwood, on the centre track awaiting departure back south. At this time the tram was carrying the 1980s Green and Cream livery. 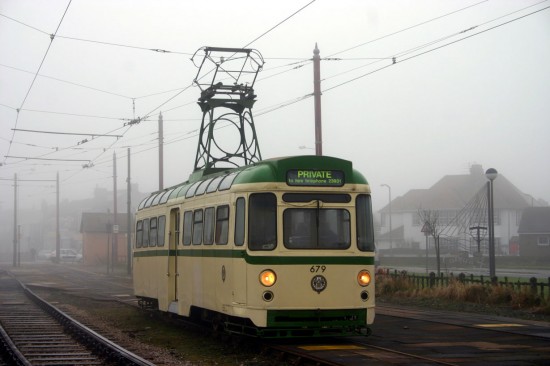 Next up we are at Bispham where 679 is joined by Coronation 304 which was also running on the shuttle service for much of the day. 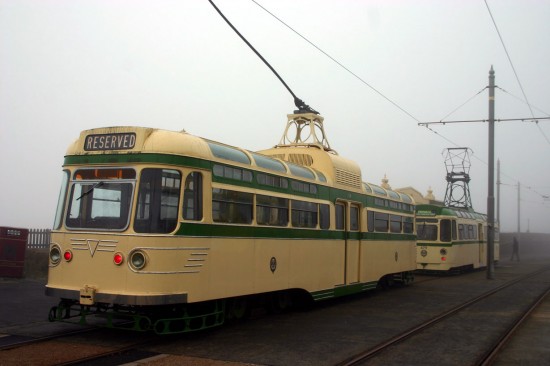 And finally we are outside the depot where 679 has terminated with the fog continuing to fall. This remains the last time that the tram ran in service with its restoration to original condition having been paused before the LTT’s trams joined by the Blackpool Heritage fleet and it is now one of many trams awaiting their turn to go through Rigby Road’s workshops. 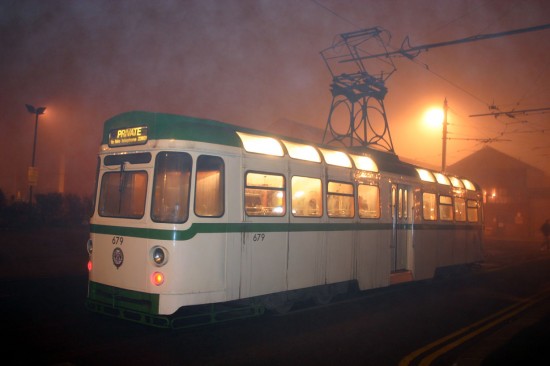