Posted on Tuesday 14 March 2017 by Gareth Prior

Today’s Picture in Time image could practically come from any of the past 40 years as it features two trams which have been the mainstays of the operational fleet at the East Anglia Transport Museum, namely Blackpool Standard 159 and London Transport 1858.

It is in fact 1986 when we find the two trams at the Chapel Lane terminus, a year when London Transport 1858 returned to service at the museum following overhaul. Although 1858 had been at Carlton Colville since 1964 – the third tram to arrive at the museum – and it had been one of first trams to run under its own power its initial operation had been limited as it was soon discovered that London Transport had managed to squeeze practically all of its viable life out of it and that it would require work before it could be used regularly. This took place throughout the 1970s and early 1980s but by 1986 it had been completed and it could take its place as part of the operating fleet alongside fellow long-term resident Blackpool Standard 159.

Talking about 159 this tram had arrived at the fledgling East Anglia Transport Museum in 1967 direct from Blackpool following its withdrawal. It made history in 1971 when it became the first tram to run under its own power at the museum (quickly followed by 1858) and has remained in service for most of the past 45 years.

In these two images we see the two trams side by side at the Chapel Lane terminus, a view which has probably been taken thousands of times over the past 30 years although today there has been a bit more development in the background. 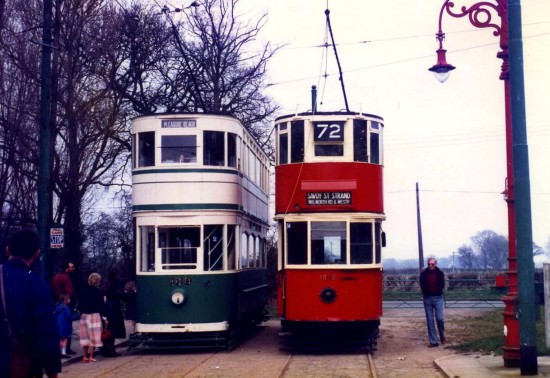 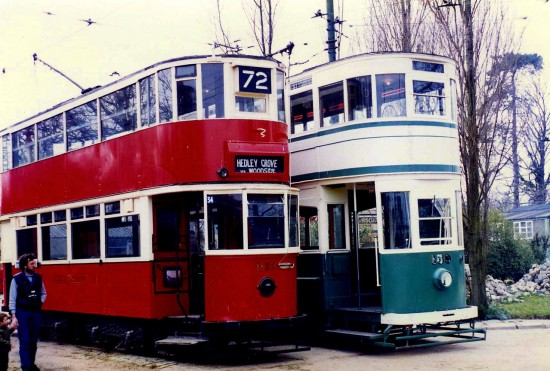 Both Photographs by Nigel Pennick