Posted on Tuesday 28 March 2017 by Gareth Prior

Another black and white photo today in the Picture in Time series as we are back on the south coast at the Modern Electric Tramways operation in Eastbourne.

The year is 1963, the month is July, the location is the Crumbles Terminus and the tram in the centre of shot is no. 6 – looking slightly different to how it looks today at Modern Electric Tramways new home in Seaton. The tram’s origin comes from 1954 when it was a single deck toastrack running in this style for just one season at Rhyl before its chassis was used to form the basic no. 6 we know and love today. Built in 1956 as an open top double decker 6 initially had a crossbench style on the lower deck but this was changed in 1962 – the year before the photo was taken – to include two saloons at each end. It retained this style until 1989 when it returned to an open crossbench design on the lower deck – and that is how it can be seen in service on the Seaton Tramway in 2017. 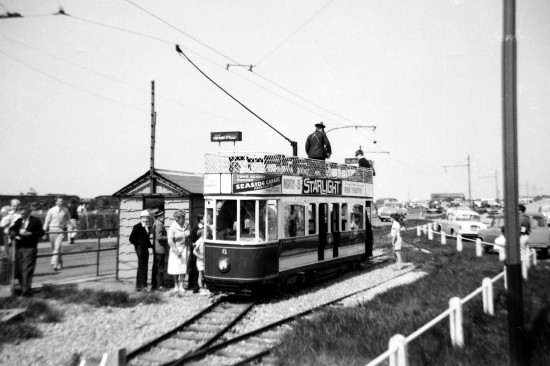