Posted on Wednesday 18 December 2013 by Gareth Prior

Providing that there is no adverse wintry weather conditions in the meantime Transport for Greater Manchester have announced that the Oldham town centre extension will open to the public on Monday 27th January 2014. As previously announced the line between Central Park and Rochdale Railway Station will have to be closed for a week ahead of this and this is expected to happen from Saturday 18th January 2014.

The weeklong closure is necessary so that the existing track can be severed from the temporary line and connected to the new alignment. Once the track and overhead are connected final testing will be able to begin and the official public opening will immediately follow this. A replacement bus service will be put into operation during the closure and details of this are due to be released early in the new year.

Cllr Andrew Fender, Chair of the TfGM Committee, said: “The arrival of Metrolink in Oldham has already been a huge success story – patronage is already double that of the former rail services – and we’re now in the final stages of completing the next chapter. The town centre line is a cornerstone in the rejuvenation of Oldham and has been the catalyst for some very exciting developments. I only hope the famous Oldham weather is kind enough for us to be able to get everything done in the timescales we’re working to. If it is and we are able to open the line at the end of January, it would be the third new Metrolink line in a row to arrive ahead of schedule – which, given the sheer scale of the work involved across the expansion, would be a truly remarkable achievement.”

The Oldham town centre extension has four new stops at Westwood, Oldham King Street, Oldham Central and Oldham Mumps and when it opens the section of line between Werneth and Oldham Mumps (temporary) will be permanently closed to trams. It is planned that by the end of spring 2014 this closed line will be fully decommissioned with platforms, platform equipment, ramps, overhead power lines, rails and sleepers removed. Some of this equipment will be retained for further use elsewhere on the network. The tunnels which Metrolink currently travels through will be sealed at both ends in an attempt to prevent trespass. 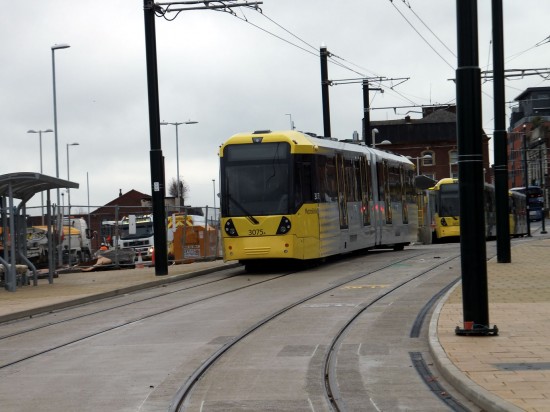 3075 stands at Oldham Mumps on 18th December during a pause in driver training. 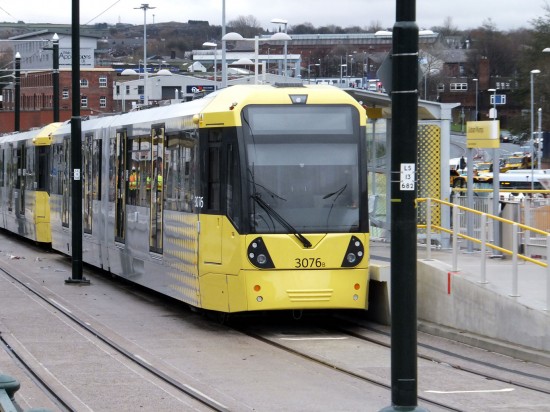 Also at Oldham Mumps is 3076. Rather typically the day the photographer went to see the trams in action they were doing nothing! 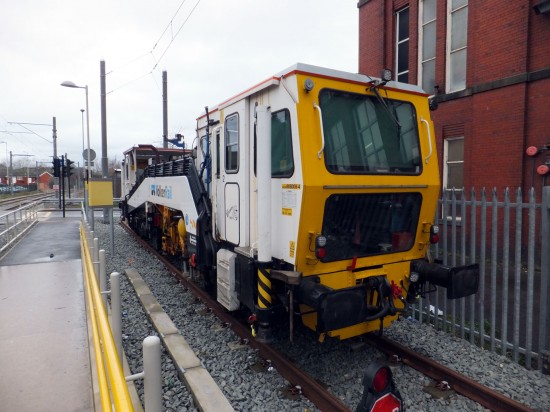 Meanwhile at Shaw this tamper is currently stabled. (All photos: Ken Walker)