The current major tram-related project at Beamish Museum may be the restoration of Sheffield 264, but that hasn’t stopped thoughts being turned towards the completion of two other tramcars. Some work has recently been undertaken on the museum’s recently acquired horse car Leamington & Warwick 8, whilst plans are also being put in place for another big project further in the future.

It may be remembered that Leamington & Warwick 8, a partially restored double-deck horse tram, arrived at Beamish from the Summerlee museum in summer 2012, having been declared surplus to requirements. Recently the external panels have been removed from the car, revealing that, as suspected, the main body frame is in very good condition and should be easily restorable. New body panels have already been ordered to replace those which have suffered some water damage and will therefore not be able to be kept. However, the ultimate intention is to combine the body shell of this horse tram with the remains of another, almost identical horse car, Newcastle & Gosforth 49, which is also presently stored off display at Beamish. This would give another tram with a local connection and, thanks to the presence of several heavy horses at the museum, would potentially enable Beamish to demonstrate horse tram operation on a more regular basis than any other British museum. Although the start of work on this job has come as quite a surprise as work on Sheffield 264 has only recently got underway, this is definitely another exciting project which should help to further cement this outstanding museum’s status as a must-see destination for those with an interest in most forms of vintage transport.

Meanwhile, discussions have recently resumed regarding the future plans for Gateshead 52. The remains of this tram are currently owned by the Tramway Museum Society and have been residing at the Clay Cross storage depot for around four decades, but following special approval by members of the Society last year, plans are now being formulated for the car to be returned to the North East, becoming the permanent property of Beamish Museum. Andy Bailey, a regular volunteer in the Crich workshops who has also assisted at Beamish a few times in recent years, recently attended the museum for a meeting and was able to present some of the first small parts of car 52 to its new owners. It is expected that the body of Gateshead 52 will be moved from Clay Cross to Beamish early in 2014, once the fragile remains of the tram have been suitably braced and strengthened to ensure that it survives its long journey unscathed. It is to be hoped that the new custodians of this tram will be much more keen to give it the major rebuild it so richly deserves than the TMS were, and that it will join the much larger Gateshead 10 in regular museum service in the not too distant future. 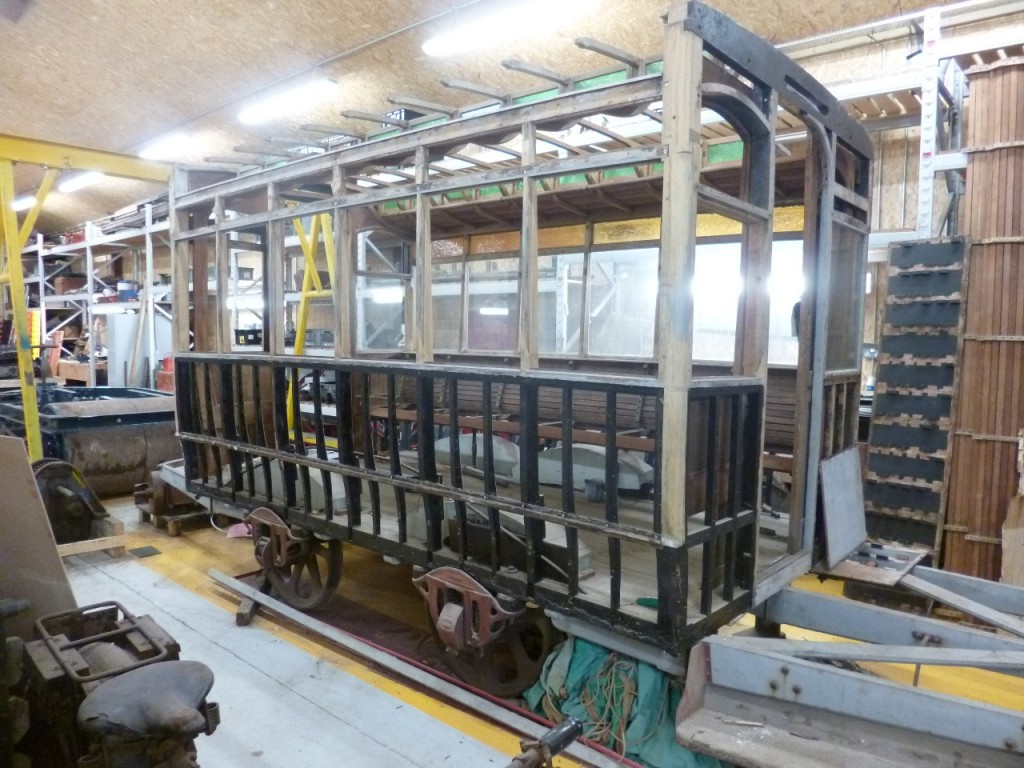 A recent view of the former Leamington & Warwick horse tram in the Beamish workshop facility. The car is now lacking its exterior panelling, revealing the main body frame beneath. (Photo from the Beamish Transport & Industry blog)