Posted on Wednesday 21 May 2014 by Andrew Waddington

The long-awaited launch into passenger service of the newly restored Liverpool ‘Baby Grand’ 245 at the Birkenhead heritage tramway will take place on Saturday 19th July, with special commemorative tickets being sold for the tram’s historic inaugural run. It had previously been hoped that 245 would be launched earlier in the year, but a few unforseen delays have meant that enthusiasts have had to wait a little longer than expected to ride on this particular tram for the first time since 1957, although the wait should of course be extremely worthwhile!

On 19th July, 245 is scheduled to operate its first ever journey in passenger service at Birkenhead, departing from Taylor Street depot at 1:00pm. This historic journey will only be accessible to pre-paid ticket holders, with special souvenir tickets for the inagural run available from the Merseyside Tramway Preservation Society priced at £10 each (which includes light refreshments at the tram depot after the first trip). Understandably, MTPS members are being given the first chance to purchase these tickets, with any remaining unsold tickets then being made available to the wider public from July 1st. For those who wish to be part of this special day, 245 will enter normal service after the inagural run with return journeys priced at £5.

Although the first day of passenger use for Liverpool 245 in preservation should be incentive enough for many people to visit Birkenhead, it is also hoped that some historic Liverpool buses will be in attendance on this day, whilst the museum’s tower wagon should also be on display. Fellow Liverpool tramcar 762 is expected to be in service throughout the day, whilst a brass band will follow 245 on its first run aboard the open top deck of Birkenhead 20, meaning that three superbly restored MTPS trams will be operated on the same day.

It had been hoped that 245 would be approved for passenger service earlier this month, but unfortunately initial test runs revealed that all was not well with the car’s tyres, with a loud noise indicating some severe wheel flats. These had not been tackled during the restoration process as they appeared to be in excellent condition, but the desire to ensure that 245 looks and sounds its best for its big day in the limelight meant that the decision was taken to lift the tram from its truck again, and the wheelsets were duly despatched to a contract firm in Derbyshire. Return is anticipated at the end of this month, and once reassembled, more extensive testing can get underway.

The only downside of the date chosen for this momentous event is that it falls on the same weekend as the annual Festival of Model Tramways, held this year at the Greater Manchester Museum of Transport. Whilst the MTPS have suggested that anyone who is interested in model trams as well as real ones attends this show on Sunday 20th July instead, this date also sees heritage Blackpool trams operating for the Fleetwood Festival of Transport, AKA Tram Sunday. This will certainly be a very exciting weekend for tram lovers in the North West, and hopefully 245‘s long awaited public debut will receive the support it deserves, as a reward for the hard work that the MTPS have invested in returning this long-neglected tram into a stunning operational vehicle. 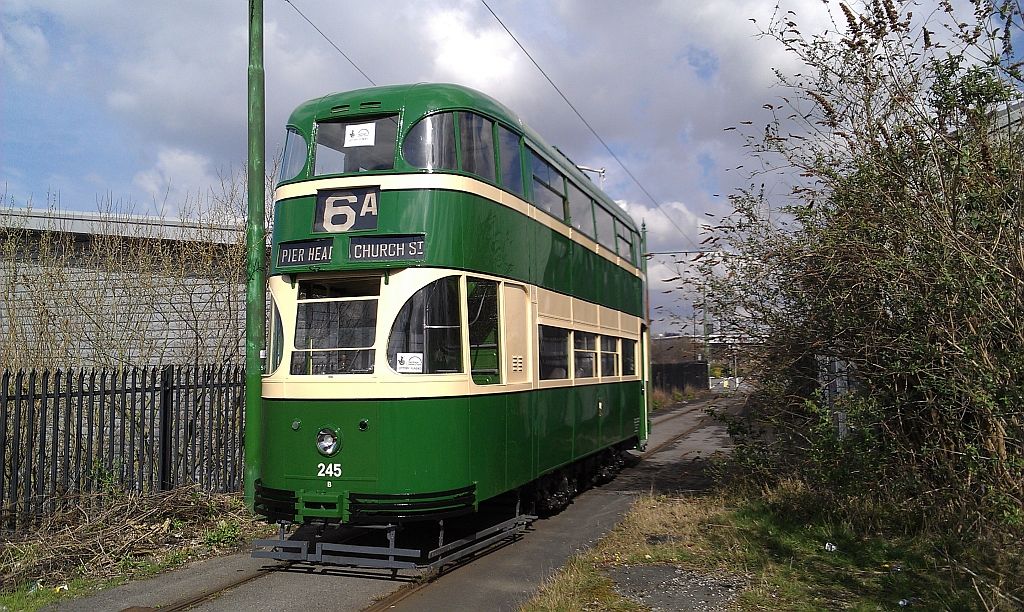 The stunning restoration work carried out on Liverpool 245 can be seen in this view of the tram on an early test run at the Pacific Road end of the Birkenhead tramway. (Photo by John Hewitt)