Centenary car 648 goes back in time

The latest member of the Blackpool heritage fleet to be fitted with replica period-style destination blinds is Centenary car 648. During yet another visit to Blackpool over the weekend of 21st & 22nd March, Peter Watts – who is supplying these new destination blinds – handed over the latest set which were then fitted to car 648.

There was some doubt as to what font style should be used as the blinds fitted to the Centenary cars when new were all specially made ‘one-offs’ which varied considerably, and so the end result is in a style that is considered fairly typical of those originally fitted to the class in general. However, they certainly are a vast improvement on the pervious blinds 648 had with bright green lettering which spoiled an otherwise very smart appearance following its repaint in 1980s green and cream back in 2013. In addition to the now familiar destination setting of ‘Heritage Tour’ and the usual locations, an unusual new addition has been made to the blinds of 648 – ‘GEC Traction 1985’, reflecting the car’s origins as GEC test car 651 between 1985 and 1989.

Since being restored to a near-1980s external appearance 648 has been a rare performer on heritage tour duty, but hopefully the increased frequency of heritage operation planned for 2015 will enable this underrated gem from the fleet to be enjoyed more often this year, justifying the attention lavished upon it in the last few years. 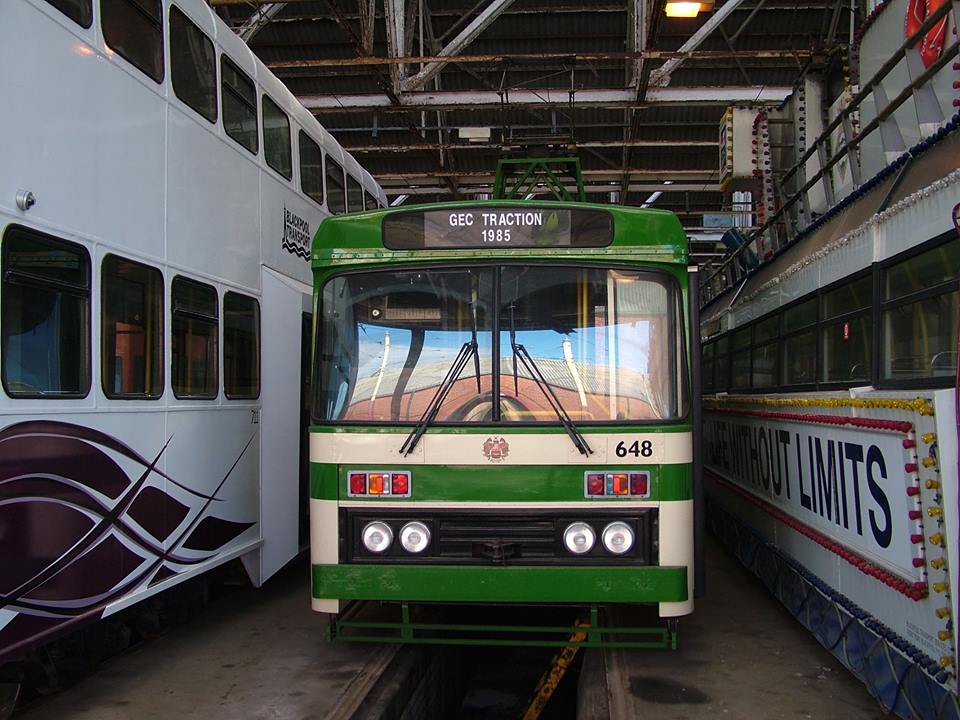 Centenary car 648 shows off the most unusual setting on its brand new destination blinds as the tram awaits for its next call of duty at the top of Rigby Road depot. (Photo courtesy of Blackpool Heritage Tram Tours)

1 Response to Centenary car 648 goes back in time