East Anglia on track for a great season

The East Anglia Transport Museum at Carlton Colville near Lowestoft, is gearing up for the start of its 2015 operating season on 1st April (this isn’t a joke – the museum does actually re-open on April Fools Day!). During the closed season there has been considerable investment in the tramway infrastructure with new track being laid; something that many visitors will probably not even notice, but which is essential to the future of this museum.

Tramway Avenue has been the subject of the main winter project with a fairly lengthy section of rail being replaced whilst the road itself has been re-surfaced with tarmac. Work started the day after the 2014 open season ended, 29th September, and was completed on schedule to a very high standard. Gauging tests were undertaken during January, and these all proved satisfactory, allowing Blackpool Standard 159 to emerge from the confines of the tram shed to test out the new track on 1st February. This happily occured without incident, allowing work on the road surface to resume the very next day and at the same time, drainage beneath the road itself has been improved which will hopefully prevent large puddles from forming in this vicinity. One minor disapointment is that the cobbled surface which complimented the nature of the museum has been replaced by a layer of tarmac; however for a relatively small museum to complete such a project on a modest budget is certainly something to be applauded, and the shiny black road will no doubt blend in better after a few years worth of vehicle use!

Whilst this work was going on outside, efforts were also in hand to prepare the various trams and other vehicles on site for another busy season and after a few struggles with tramcar availability last year, it is pleasing to note that the 2015 season begins with a very credible four trams available for service. These consist of Blackpool 11, Blackpool 159, Sheffield 513 and London Transport 1858. The availability of car 11 – which was out of action for a while towards the end of 2014 – is especially good news. 513 remains restricted to turning short of the current wooded terminus although plans are afoot for some attention to the points here, hopefully later in the year, which would enable it to operate over the full length of the line. The one notable absentee from the running fleet is still Amsterdam 474 which remains unavailable due to motor issues, and this car will need to be lifted from its truck to be repaired. However, a pool of four contrasting trams is certainly nothing to be sniffed at for a small museum and with plenty of trolleybuses and other vintage vehicles also active, 2015 should be another good year at Carlton. 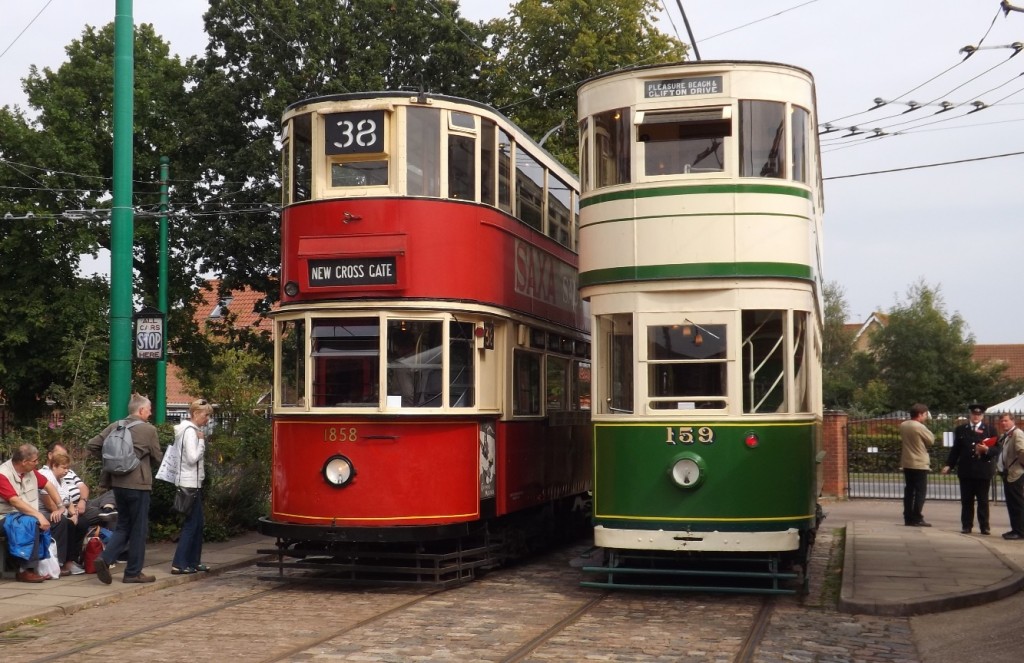 Two of the long-serving stalwarts of the running fleet at East Anglia, London 1858 and Blackpool 159, are seen together near the museum entrance at Chapel Road last year. (Photo by Tony Waddington)