It is nearly time to welcome trams back to the streets of Edinburgh (Saturday 31st May at 0500 is the first public service don’t forget!) and as part of our countdown to the opening we provide you with a quick guide to the services due to run and tickets valid for use on the trams.

Trams will run between 0500 and just before midnight each day during the week with higher frequencies being offered on Mondays-Saturdays than Sundays although the basic hours of operation remain the same.

On Mondays to Saturdays trams heading for the city will run “at least” every 10 minutes from Gyle Centre until 0618 and then the next tram bound for the city will be the first full length journey from Edinburgh Airport. From this point on all city bound services will be full length journeys running “at least” every 8-10 minutes until the final journey of the day leaving the Airport at 2245 and arriving at York Place at 2324.

Monday to Saturday services outbound from York Place commence with the 0529 and then leave at 0540, 0550 and 0600 before settling into a frequency of “at least” 8-10 minutes for most of the rest of the day (all these services go the whole length of the line). The final full length journey from York Place to the Airport leaves at 2308 (arrival at the Airport at 2347) before two further services leave for Gyle Centre at 2318 and 2354.

On Sundays although the hours of operation remain almost identical (the last service on the timetable arrives back at Gyle Centre three minutes later than the rest of the week) the service frequency is reduced with trams only running “at least” every 12-15 minutes for most of the day. Also early morning services run at different intervals but the first full length journeys of the day remain as on Mondays-Saturdays.

It has to be said the published timetable on the Edinburgh Trams website and in the Tram Guide is not the most user friendly but along the lines of systems such as Manchester Metrolink it seems that Edinburgh Trams are hoping people will take more notice of the service frequency rather than actual times of departure.

In previous literature it was suggested that 17 trams would be needed for the main service on the tramway but rough workings out we have made (which have been done very quickly so could be wrong!) suggest that as few as 11 trams could operate an eight minute frequency.

The cost of how much it is to travel on public transport is always a bone of contention and it has been no different with Edinburgh Trams, especially when the fares rose before a service had run! An initial announcement in September 2013 suggested there would be three levels of fares with the top price being a £7.50 return ticket to and from the Airport but the final announcement in April saw changes to this plan with a 50p increase on all Airport fares and the removal of the middle range of fares.

All tickets will have to be either validated or purchased before passengers board the trams with a Standard Fare of £10 liable if this is doesn’t done. There are two zones of fares: one covers all stops from York Place to Ingliston Park and Ride with the other covering the entire network including to the Airport (a major premium is added to anyone wanting to head to the Airport).

The following tickets are available for purchase on the day from ticket machines at each stop:

As well as these paper tickets (special platinum versions will be available for the first 100,000 passengers) a number of other tickets will be valid on board the trams:

Citysmart – Pre-paid card for single journeys within the City Zone (available from Summer 2014). Must be validated before travel.

m-ticket – Buy in advance with a mobile phone and activated before boarding.

Ridacard – Pay in advance which offers the lowest price for unlimited travel. Must be validated before boarding.

Scottish National Entitlement Card – Holders of this concessionary pass issued by the City of Edinburgh Council will travel free on the trams. Blind or visually impaired holders of the card issued by other Scottish local authorities will also be able to travel free. 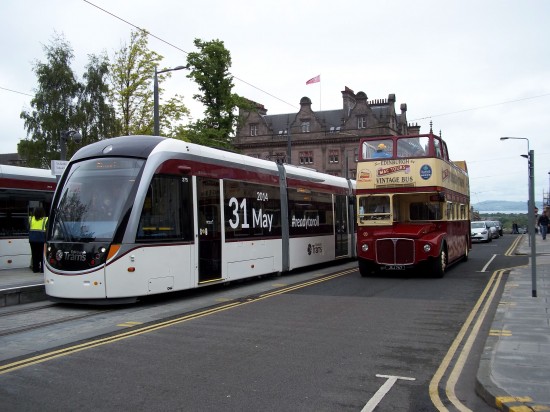 The old and the new at St Andrew Square on 24th May as Edinburgh Trams 275 comes across Routemaster JSJ 747 which is in use as part of the Lothian Buses subsidiary Mac Tours. (Photo: Alasdair Macfarlane)