So just where will Edinburgh Trams be going? And what about the trams in the fleet, what are they? Well if they are questions you have wanted to ask but haven’t this is the place to find the answers!

Line 1 of Edinburgh Trams (OK we’re being a bit optimistic here in that it is currently the only line but who knows what the future may bring!) runs for 14km (8.6 miles if you prefer but we think 14km sounds more impressive in this instance!) between Edinburgh Airport and York Place in the city centre with 15 tram stops including one park and ride site, interchange with three railway stations, an airport and lots of bus routes.

Trams will take approximately 40 minutes to run from end to end with priority over other road traffic at junctions to help speed the service up to make it a more attractive proposition to passengers.

The state of the art depot at Gogar was one of the first pieces of infrastructure completed and was officially handed over to the Council in early 2012. It has plenty of space for all 27 trams in the fleet and all regular maintenance will be able to take place there although as with other systems in the UK any major accident damage is likely to have to be sent away for rectification.

Whilst most tramways in the UK struggle for capacity Edinburgh Trams has completely the opposite problem as the 27 CAF built trams now preparing to enter service were ordered when the network was due to much bigger and attempts to sub-lease some of the vehicles elsewhere have proved fruitless.

The trams were built by CAF at their factory in Beasain, Spain and are the largest constructed for any system in the UK. Each tram is formed of seven sections and come in at 42.8 metres long. There is capacity for 250 people per vehicle with 78 of these being seated in plush high backed leather seats. One of the interesting internal features of the trams is special night screens which enable sections of the tram to be closed off at quieter times of operation.

The first of the trams to arrive in Edinburgh was 252 which was delivered on 26th April 2010. As this was before Gogar Depot had been completed it was put on display in Princes Street on already installed track. Unfortunately when its time on display was over the depot was still not completed so the tram had to be moved to open storage (in several sections) before it was finally moved to Gogar in October 2011. 252 was not in fact the first tram to arrive at the depot as 277 beat it to it by a few days becoming the second tram to be delivered to Edinburgh on 17th October 2011. Over time the remaining 25 trams were gradually delivered to Edinburgh before the final example, 269, arrived on 19th December 2012.

Even though the system has yet to open to the public there have been four (maybe five if you include the #readytoroll vinyls) different liveries carried on the trams although the first one was only carried on the mock-up:

* White with madder stripe and no logos

At the present time the vast majority of the trams carry the Transport for Edinburgh livery style but at least one (262) is still known to be in the as delivered third livery. In addition 275 is carrying vinyls on side windows advertising the opening of the system on 31st May but these are expected to be removed in the coming weeks once the system is up and running.

Although the current system will not need anywhere near 27 trams it is expected that all of the vehicles will see fairly regular use (but by our reckoning less than 50% of the fleet will be needed on a daily basis). Currently no external advertising is being carried and is not known whether in the future Edinburgh Trams will seek this extra revenue stream but for now enjoy the uniform style of the trams as they carry fare paying passengers for the first time.

Key dates for the trams

26th April 2010: First tram, 252, delivered to Edinburgh and is displayed on Princes Street

12th December 2012: 277 becomes the first tram to run to Edinburgh Airport on test

8th October 2013: Testing is extended to Edinburgh Park with 267 the first tram to do the honours

2nd December 2013: 264 becomes the first tram to reach Haymarket when it performs a walking speed test on the recently completed section from Edinburgh Park.

31st May 2014: Which tram will have the honour of running the 0500 from Gyle Centre to York Place and book its place in the history books? 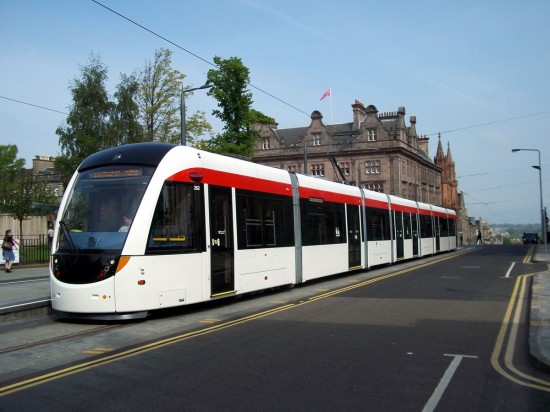 262 - still in the as delivered livery - sits at St Andrew Square on 19th May 2014. This is believed to be the only vehicle still in these colours. (Photo: Alasdair Macfarlane)