Posted on Saturday 26 June 2021 by Gareth Prior

This week it is into the recent archives again with Nottingham Express Transit the latest location:

As you may have noticed earlier this week when our latest edition of “Still Standing” was published that series has now come to an end (hopefully only temporary!) and we will take advantage of that to change things up a bit and revert to having the photo series only running on selected days of the week. From Monday 28th June the pattern will be: Monday – “Whatever Happened To?”, Friday – “Picture in Time”, Saturday – “Around the World in Trams”, Sunday – “Stop by Stop”. If the amount of news reduces again in the future we will look at resuming more photo series during the middle part of the week. 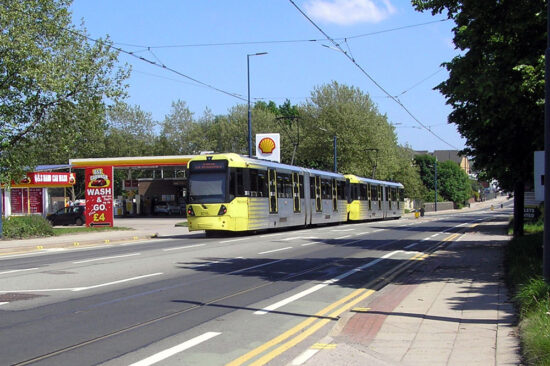 With news now reaching us that a more normal timetable will resume on Manchester Metrolink from 5th July this week’s “Picture of the Week” takes a look at the Eccles line with a view on Eccles New Road. The Eccles line (on the section between Broadway and Eccles) will be one of those which actually gets a slightly worse peak time timetable as it reverts to every 12 minutes (instead of the current every 10 minutes) although the section between MediaCityUK and Etihad Campus will have trams every 6 minutes with the return of the intermediate services on many routes. This image was taken on 31st May 2021 and shows 3018 coupled to 3112 as the pair head away from the camera on the way to Ashton. (Photograph by Keith Chadbourne)