Posted on Saturday 26 June 2021 by Gareth Prior

In this edition of “Around the World in Trams” we see another of the San Francisco PCCs in action on the F-line streetcar service.

This photo was taken on 4th September 2006 and shows 1062 on the way to Castro as a trolleybus heads in the opposite direction. This was another PCC which purchased by Muni from Southeastern Pennsylvania Transportation Authority in 1992 following its retirement there. It started off life as 2101 in the Philadelphia Transportation Company in 1948. Following restoration to service on the F-line was finished off in a “tribute livery” to the Louisville Railway Company, although since has now received a Pittsburgh red livery. 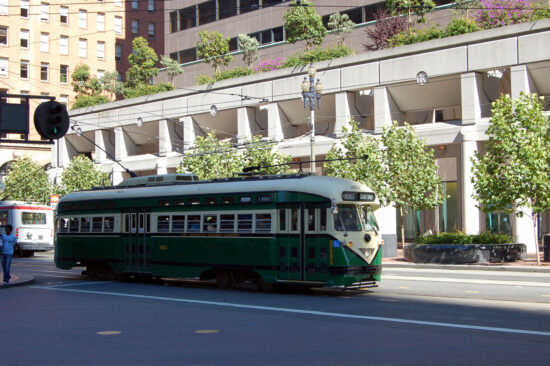