Following last week’s news that Glasgow 488 has returned to the UK (well half of it so far anyway) to be restored for operation at the East Anglia Transport Museum we have now received further information on how the repatriation came about and how it will be funded.

As was reported last week 488 was sent to the Paris Transport Museum in the early 1960s and had received a thorough overhaul in 1960 but following this work it had been pressed back into service after the devastating Dalmarnock depot fire in March 1961. 488 ran the last 18 from Burnside on 3rd June 1961 after which it departed to mainland Europe (with the two decks split for ease of transport) for display at the Paris Transport Museum – known as AMTUIR – at their Malakoff premises (where the two decks had been reunited). As the Museum moved between sites it was necessary to split the tram in two again because of the low height of a building and eventually 488 was placed into store alongside London Trolleybus 796.

On 6th October 2010 the trolleybus returned to the UK following a request from the London Trolleybus Preservation Society and this now resides and operates at the East Anglia Transport Museum, which is where the link with 488 comes from. AMTUIR decided to reduce the number of vehicles in their condition and offered the tram to the East Anglia Transport Museum Society but they were unable to gain access to the store where 488 was kept and so they could not get quotes as to how much it would cost to restore the tram.

Just a few weeks before 488 had been offered to the EATMS, Peter Mitchell, from Cheam in Surrey, made a Will which stated that money from his estate could be used for the restoration and preservation of trams and trolleybuses that had their origins in the British Isles. Mr Mitchell gave various examples of those vehicles he would like to see the money spent on and one of these was 488. Shortly before he sadly passed away he was told that his money would enable Glasgow 488 to be returned to the UK and fully restored to operational condition.

The Ffestiniog Railway were approached to conduct the restoration because they had performed such a professional job on a London Transport Metropolitan Railway Coach which was used on the 150th anniversary of the London Underground specials. The Ffestiniog were only too willing to take on the restoration and the rest as they say is history with 488 arriving in Wales on 6th March 2013 (as extensively reported last week). The top deck will soon follow and then a full restoration will be undertaken. Following this the tram will be moved to the East Anglia Transport Museum who will in due course become the owner of the tram.

* A website has been set up to detail the restoration of the tram and this can be found at http://www.488.cyberpictures.net. Any enthusiasts are requested not to contact the Ffestiniog Railway about the restoration. 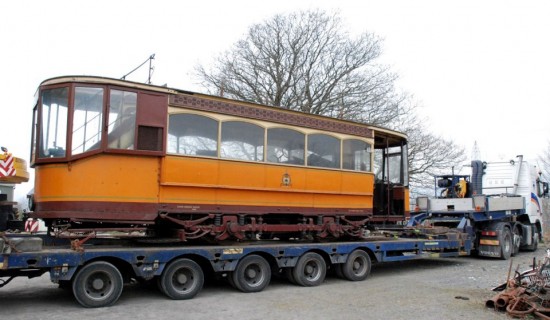 The lower deck of Glasgow 488 is seen on the back of the lorry having just arrived from France. (Photo courtesy of Ffestiniog & Welsh Highland Railways Facebook page - http://www.facebook.com/festrail)