Posted on Tuesday 22 December 2015 by Gareth Prior

Today Picture in Time goes continental! Obviously this website is British Trams Online so we concentrate on trams which are either British or have spent some of their life in the British Isles so the two trams we feature today can now be found in the country although at the time of these photos, taken in 1992, they were firmly still in their home city of Lisbon.

The first tram featured below is 361 which originally entered service in Lisbon in 1907. It was built by John Stephenson & Co., a subsidiary of Brill and was reconstructed during the period 1959-61 into the style seen in this photo. The tram survived in service until 1996 when it was withdrawn and then entered preservation making the trip to the UK where it arrived at the Black Country Living Museum, mainly as a source of spare parts. To this day it remains in Dudley stored outside awaiting a decision to be made on its future. This photo shows the tram in an advertising livery on 27th May 1992 at Cais de Sodre. 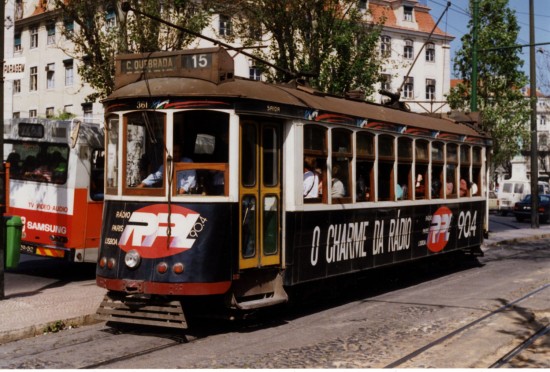 The second photo was also taken on 27th May 1992 and shows probably the most famous of the Lisbon trams to arrive in the UK – 730. This tram was built in Lisbon’s own workshops as part of batch of trams built between 1935 and 1940 with this class of trams used on the routes with the most steep inclines. In this photo the tram is also carrying an all over advertising livery rather than the more familiar yellow colours. The tram was transported to the UK in the mid 1990s and originally found a home at the Seaton Tramway (for photos of this see Picture in Time 5 ) but was soon moved to Essex for further storage. Then in 2004 it was donated to the Merseyside Tramway Preservation Society where it received a full restoration being regauged to standard gauge at the same time – the only Lisbon tram in the world to be standard gauge. 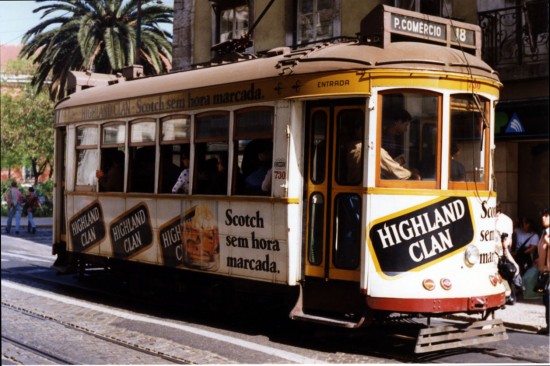 Both Photographs by Gordon Burch, courtesy of Crich Tramway Village