Blackpool Standard 147 became the first tram in mainland Britain to carry to Olympic flame when it was used for the iconic object’s visit to the Fylde Coast as it travels across the country ahead of the summer’s Olympic Games. Unfortunately its arrival was greeted by absolutely appalling weather conditions, leading to plans to use Open Boat car 600 for the role being cancelled and the enclosed 147 being used instead. Although obviously this restricted the view of the torch to onlookers, a good crowd still braved the elements to witness the event.

At 4:52pm precisely, the familiar torch was delivered to Rossall School where 147 was waiting for it, having run to Fisherman’s Walk and reversed there after being stabled at North Pier for a while earlier in the day. The flame was then transferred into a lantern – presumably to minimise the risk of it setting fire to the 88 year old tramcar – and was carried on board for the short journey to West Drive, where the torchbearer carried it away to continue its journey to the Tower Festival Headland. There a concert had been planned to celebrate the occasion, but due to torrential rain and strong winds this was cancelled and the torch was taken to the Tower Ballroom instead of being displayed on the promenade for the evening. This was a tremendous shame, as not only was this fantastic opportunity to showcase Blackpool’s new concert venue to the nation lost, but also the major disruption to the tram service which saw no trams run between Manchester Square and North Pier become a complete waste of time. Indeed, questions are already being asked about how suitable Blackpool promenade is for an outdoor arena as last week’s inaugural concert was also cut slightly short due to high winds, although the headline act, Sir Elton John, was still on stage for a highly credible 2 hours.

Whilst Blackpool’s participation in the events leading up to the Olympics was of course a notable event, it is perhaps more noteworthy to us that this was 147‘s first trip north of Little Bispham since the 2010 season. Of course the wait to venture to the northern terminus at Fleetwood Ferry for the first time since November 2009 goes on for this particular tram, but nonetheless it made a very welcome sight on the tramroad. Whilst 600 would have been an even better choice it is pleasing that Blackpool Transport did utilise a vintage car for this important role in spite of the weather doing its best to ruin the day. 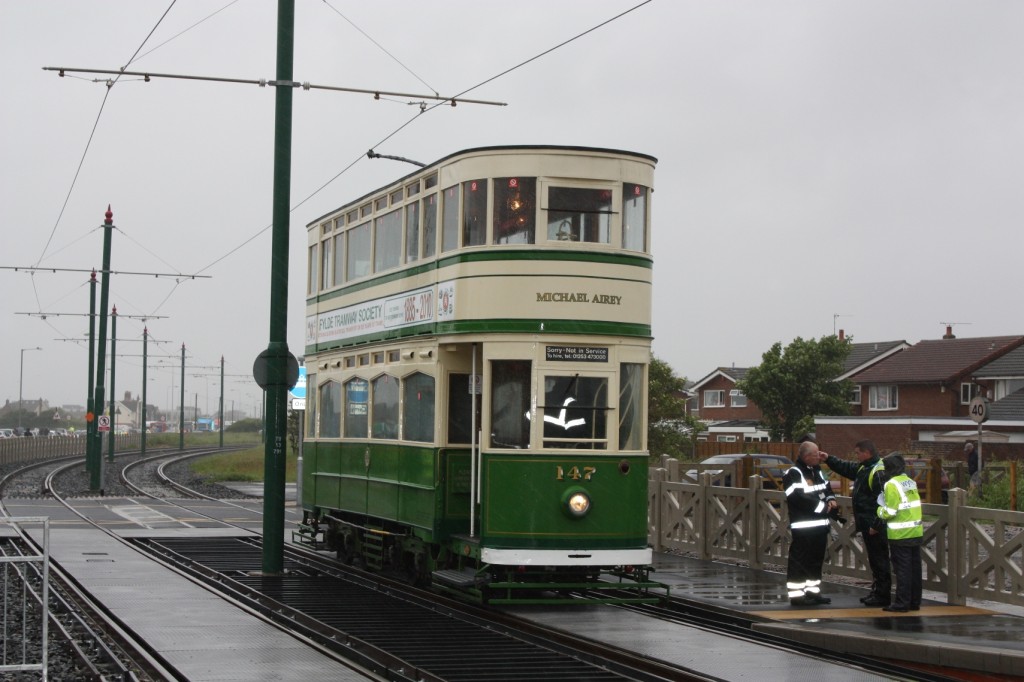 Standard 147 emerges through the gloom at Rossall as it carries its precious cargo along the reserved tramway as part of Blackpool's contribution to the pre-Olympic festivities, (Photo by Andrew Blood)