Not much has been said about the fleet of widened Balloon cars in Blackpool of late, but behind the scenes cars 711 and 719 are still under modification in the workshops at Rigby Road in readiness for their future role on the upgraded Blackpool tramway. This comes in spite of some doubts as to how much use the rebuilt double-deckers will actually see, with very few appearances by these trams recorded so far this season.

Thus far in 2012, only three of the widened Balloon cars – 700, 713 and 724 – have actually carried passengers with the others all confined to depot since the tramway re-opened in April. 724 managed a single aborted trip to Little Bispham before failing with a door fault and has not run since, whilst 700 has run twice in 2012: once for a private hire, and then again on heritage tour duty for its novelty value. First choice of these cars to run is 713 which has appeared on normal specials a few times, including a couple of runs to Fleetwood to supplement the core service trams. This tram has recently been transferred to Starr Gate depot again having spent several weeks back at Rigby Road, presumably in case it is needed as an extra car for use over the extended Bank Holiday weekend.

Meanwhile in the workshops, 711 is currently based in the Fitting Shop where reconstruction of its centre door frames continues to allow its continued use. The car has also had its lower body sides repanelled, giving the strongest hint yet that it is unlikely to return to use in its garish advertisement livery for Blackpool Zoo which it received two years ago. 711 should look quite different when it eventually reappears as it is also expected to receive the revised skirt and bumper arrangement, finally removing the traditional lifeguards from the car for the first time since it was built.

However, despite the attention being lavished upon 711 and sister car 719, many people remain doubtful as to the potential role these cars will play on the modernised system. Although it could be argued that there has been little need to run these trams so far this season, when the school holidays start in July the Flexities should be operating an end-to-end service every ten minutes which will reduce the need for extra trams. Plans for an intermediate Pleasure Beach to Cleveleys service seem to have been quietly dropped and with the heritage tours also likely to increase in frequency during the peak summer season, it is doubtful whether the widened Balloons will be needed.

It was once thought that the advertising contracts still valid on most of these cars could be the justification for them to be used frequently, but it has been suggested that all of them are to be transferred onto buses to ensure that the adverts gain enough exposure. The Madame Tussauds design on car 718 has already been copied onto a bus, and it is believed that another is now receiving a livery for the Sea Life Centre. Hopefully illumination Saturday evenings and the busy October half-term week will see the Balloons back in action, but in spite of Blackpool Council’s insistence on making these trams compatable with the new loading platforms at tram stops, it seems hard to imagine them ever recoping the money that has been spent on rebuilding them unless things change drastically in the very near future. 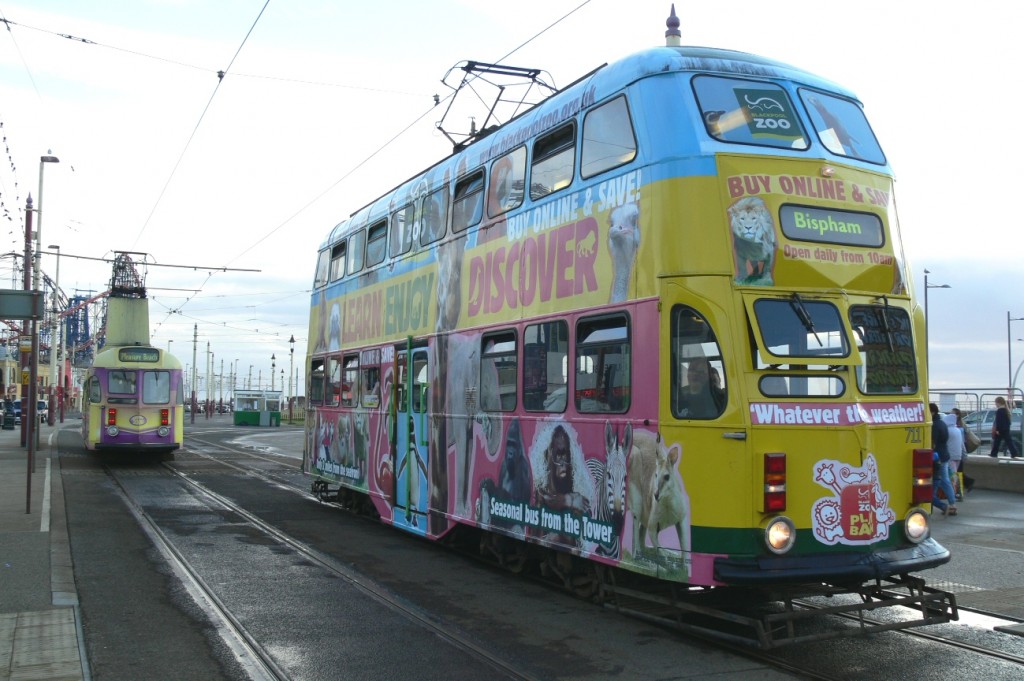 A last look at Balloon 711 in service last autumn, before work began on its latest makeover. Also visible is Brush car 630, now in service at Crich. (Photo by Andrew Waddington)