The summer of 1976 is well known as being a warm one and this latest edition of “Picture in Time” illustrates that was still the case in early September.

Taken in Pharos Street, Fleetwood this image shows Balloon 713 just at the start of its journey to Starr Gate with all opening windows as far open as they can be and even the centre doors fully open to try and get some additional air for the small number of passengers on board.

This tram was the first of the second batch of trams we have come to know as Balloon Cars and as such has always been a fully enclosed car rather than the first set which were open toppers to start with of course. Entering service at the tail end of 1934 its single destination indicator had been fitted in 1955 but as with 715 a couple of weeks ago, in 1976 it still featured roof windows. There seems to have been some bird activity on the roof the tram with the green paint interrupted in places and as with many trams of this period it includes between deck adverts, these being for Empire. Note also the ”Caution Oncoming Trams” sign of the left. 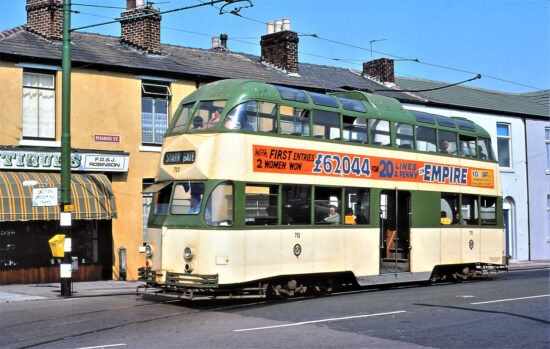