Balloon 715 to visit workshops as progress made on Railcoach 279

It has been confirmed that Blackpool Balloon 715 is to visit the workshops at Rigby Road to refresh its appearance for 2019 whilst a fellow Fylde Transport Trust – Railcoach 279 – continues to progress at Brinwell Road ahead of its much anticipated return to service.

Balloon 715 is very much a popular member of the heritage tram fleet and the most visible sign of this work will be modification of its paintwork. This has been prompted by the expiry of the advertising contract for Fleetwood Tram Sunday – 715 featured between decks adverts for this annual event – and as a result the tram will have its paintwork modified back to the 1970s style. But the most notable part of this work will be the application of period between decks adverts.

Dependent on the amount of funding available other jobs which may be undertaken include some replacement of upper deck woodwork and the aged plastic ceiling panels and returning the cabs to the familiar gloss brown.

Meanwhile at Brinwell Road good progress continues to be made on the restoration of Railcoach 279 in full “pointed end” style. One of the steel frame ends has now been completed and is now due to be duplicated for the other cab. In addition the fibreglass roof dome has been completed with this set to be sent away to NM Fibreglass to allow for two copies to be made. Both of these jobs have been painstaking getting everything just right but now they are complete work can progress with other areas of the tram.

As previously reported this will include a full rewire and a second company have recently inspected 279 to quote for this work. When completed the tram will have modern PVC coated cable traction wiring replacing the previous vulcanised rubber insulated copper cable which no longer meets modern safety standards. And if all that wasn’t enough the Tramway Museum Society are loaning some windscreens to the FTT which will patterns to be made for new screens. 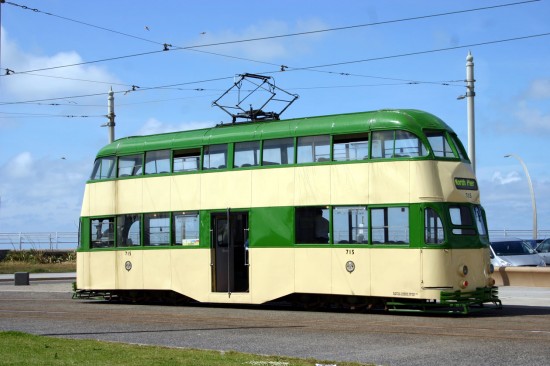 A return to the 1970s livery style is on the cards for 715 once work is completed at Rigby Road. The tram will also feature period adverts. We see 715 here on 5th August 2011 – the last year of the traditional tramway in Blackpool – at Pleasure Beach at rest before heading back to North Pier. (Photograph by Gareth Prior)