Posted on Thursday 17 January 2019 by Gareth Prior

Open top trams are always popular – no matter whether you are by the seaside or alongside a quarry in the Derbyshire countryside! In this edition of Picture in Time we feature two of Crich’s examples of open toppers; neither of which are currently operational but for one that should change in the next few years.

The two trams in the below photo are Newcastle 102 and Paisley 68 and they are likely to have been caught on camera sometime in the very early 1980s.

102 was originally built in 1901 but underwent reconstruction before entering service with this not happening until 1903 and it then remained in service until 1949. The tram was soon preserved but had no home and spent time in Bury before moving south to Hampshire and display at the Montagu Motor Museum in Beaulieu. It was then moved to Newcastle for restoration (which was completed at the TMS’ off site storage location) and finally arrived at Crich in 1975 – 26 years after being preserved it finally reached its new permanent home. It operated in service at various times since 1975 – including a spell at the Gateshead Garden Festival – but was withdrawn in 2000 suffering from a broken axle. Entering the workshops at Crich in 2018, 102 should return to service in the next few years.

As for Paisley 68, this tram is now more easily recognisable as Glasgow 1068, but was originally built in 1919 for Paisley Corporation Tramways before that tramway was taken over by Glasgow in 1923. Becoming 1068 in the enlarged Glasgow fleet the tram gradually lost its original open top condition and remained in service until 1953 when it was withdrawn and acquired by the Scottish Tramway Museum Society. The tram was overhauled in Glasgow and was then an early arrival at Crich in 1960. The tram became Paisley 68 once more in the mid-1960s and was a regular performer at Crich and like the other tram in this photo returned home to a Garden Festival, this time the Glasgow version in 1988. 68 became 1068 again in 2012 for the 50th anniversary of the closure of Glasgow’s tramways and after a spell on loan to Beamish it settled into another brief period of operation but is currently withdrawn from service again now waiting for space in the busy workshop programme.

This photo shows the two trams adjacent to the depot entrance – not the absence of the Bowes Lyon Bridge which now dominates any similar photo. Both trams seem popular with visitors! 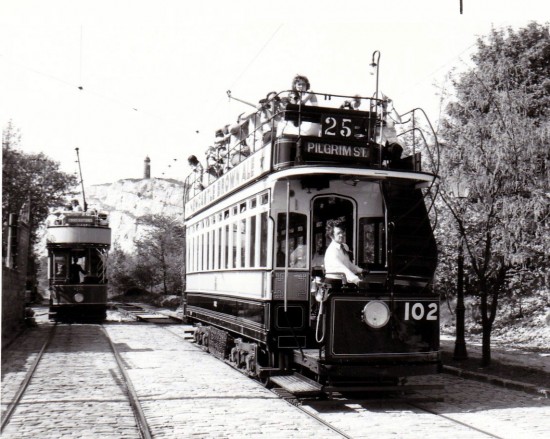