The winter season at Beamish Museum has now commenced, bringing it with reduced opening hours and preperations for Christmas. However, any concerns that the level of interest at the museum would reduce are unfounded; most of the usual attractions remain open for business as normal at weekends, and the tram service continues largely unaffected.

Beamish Museum is now closed on Mondays and Fridays, with closing time now 4:00pm for the rest of the week. Some evening events are planned for the festive season, however, and decorations have already started appearing on several buildings in the Town area and on the three single-deck trams in the regular operating fleet – Leeds 6, Grimsby & Immingham 26 and Oporto 196. Surprisingly Newcastle 114 has also been trimmed up for Christmas, suggesting that this open topper may also run again before the year is out. By contrast, Blackpool 31 has been placed on the ‘dead’ track in the depot, where it joins Sunderland 16 (currently awaiting new tyres and also now robbed of its trolley head) and Sheffield 264 (long-term out of service awaiting a major overhaul). Blackpool ‘Boat’ 233 is currently residing in the lean-to building alongside the main shed following its surprise outing last week, where it is parked in front of 114.

Since entering service at the museum, Blackpool Coronation car 304 has been a surprisingly regular performer and has been in operation on most days that the museum is open. Sunday 11th November was due to be its last day of use before heading back to Blackpool, although it is not known if its owners have yet arranged for suitable undercover accomodation. The tram is also expected to receive repairs to some minor accident damage before leaving Beamish, and so it may well stay in the North East a little longer than was previously expected. The sight of 304 running at Beamish alongside fellow LTT-owned tram Sunderland 101 (alias Blackpool ‘Balloon’ 703) has undoubtedly been one of the tramway highlights of the past year, and once again shows what great things can be achieved when different organisations work together to achieve common goals. Incidentally, the Balloon car is presently living outside due to 304 taking its place in the depot – but this should only be a temporary measure.

For anyone planning to visit Beamish between now and 21st March next year, please note that on Tuesdays, Wednesdays and Thursdays, only the Town, pit village and tramway are open. At weekends visitors can also enjoy the delights of Pockerley Old Hall and Home Farm, although the Steam Waggonway is now closed for the winter. There will also be some additional attractions at weekends leading up to Christmas. Last admissions are at 3:00pm with the site closing one hour later. 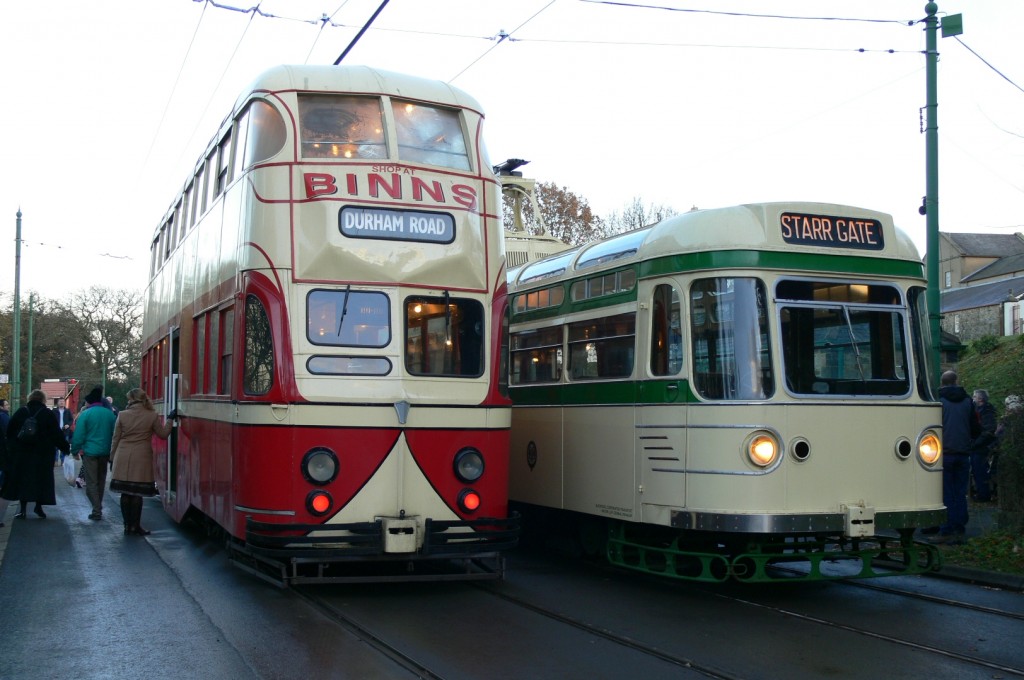 Sunderland 101 and Blackpool 304 repose at the Museum entrance on Saturday 10th November as the day's tram service draws to a close. (Photo by Andrew Waddington)