In a surprise move, Blackpool Balloon car 719 has been moved from Rigby Road to Starr Gate depot following work to bring the tram in line with the other modified Balloons, for continued operation on the upgraded tramway. The tram was moved on or before Friday 21st September and is currently the only traditional tram housed at Starr Gate.

719 last ran at the end of the 2011 season and since then has been hidden away in the workshops at Rigby Road where it has received the centre door modifications to make it compatable with the platforms on the LRT system. Following removal of the striking advert livery for Blackpool Pleasure Beach it had carried for two years, 719 was briefly moved into the Paint Shop but has since been transferred to the new depot at Starr Gate and is expected to become the first tram to be repainted there. The car has already received some pink undercoat, and will presumably receive the new Flexity-style tramway livery of white and purple, as per fellow modified car 700. Otherwise the tram remains in the black base coat from its previous all-over advertisement, looking rather messy following removal of all of its vinyl adverts. It is currently standing at the back of the depot with its pantograph fastened down, and is not normally visible – but your writer was lucky enough to be in the vicinity when the doors were opened to let another tram out!

It is not known how long this tram will stay at Starr Gate or when it will be back in service, but with none of the widened Balloon cars being used so far since the illuminations switched on, it is highly doubtful that 719 will actually run this year. There is also one other double-decker still being rebuilt at Rigby Road, car 711, although it is not known how far advanced this work is. In addition, car 720 has not operated at all during 2011 and has been damaged in a shunting accident, casting some doubt over its future. Hopefully at least some of these cars will run before the end of 2012 in order to silence the critics of the time and money invested in modifying them for further service. 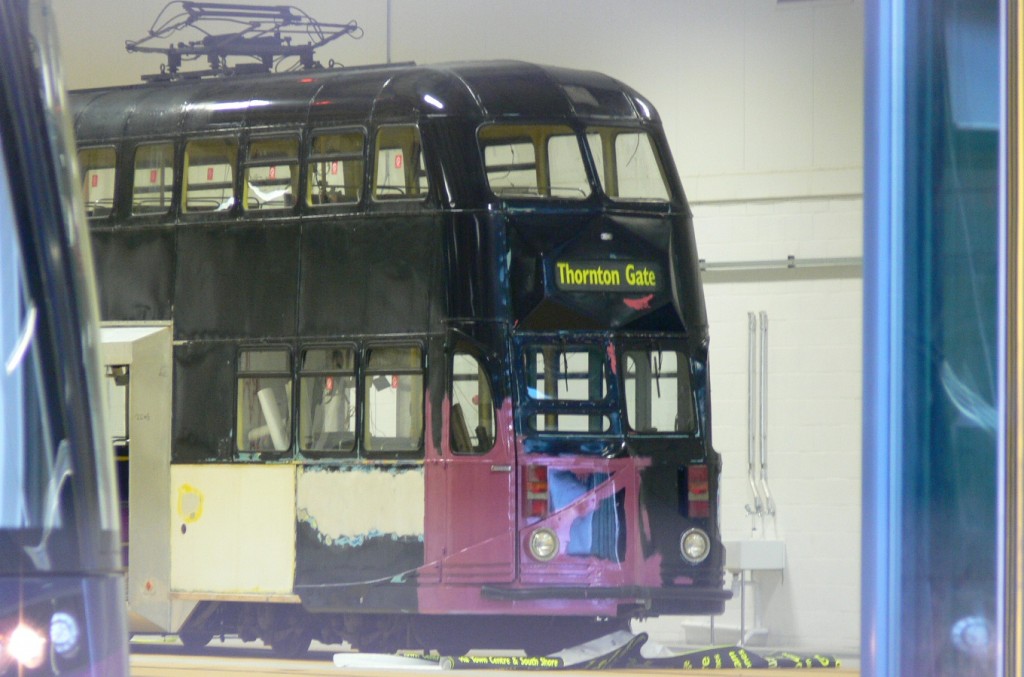 An exclusive peek at Balloon 719, showing the remnants of its Pleasure Beach advert, tucked up inside Starr Gate depot on September 21st. The first traces of undercoat can clearly be seen on the ends of the tram. (Photo by Andrew Waddington)