Posted on Sunday 6 March 2016 by Gareth Prior

Picture in Time today heads to the West Midlands for a view dated to 2000 of Midland Metro T69 03.

03 arrived at the Wednesbury Depot of Midland Metro of 17th June 1998 but even before services could begin the tram was in the wars when it was struck by lightning causing significant enough damage to delay its entry into service. Once the tram did enter service it soon settled into a regular pattern of operation receiving the name Ray Lewis and always carrying the standard fleet livery. It remained in service until almost the very end of 2013 when it became the third tram to be withdrawn permanently and the first for four years. Despite being withdrawn so long ago 03 is one of the eight trams which remains at Wednesbury awaiting removal for further storage.

In this photo we see 03 on 15th July 2000 running along Bilston Road having just come under the railway bridge with a service from Wolverhampton St George’s to Birmingham Snow Hill. 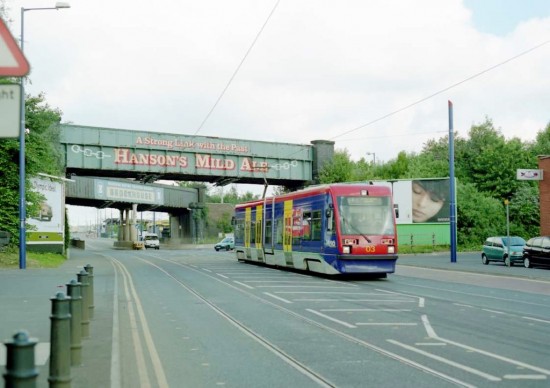