Posted on Sunday 15 November 2015 by Gareth Prior

Over the years several of trams in operation on Croydon (now London) Tramlink have broken free of corporate colours to receive advertising liveries. In today’s “Picture in Time” we feature one of the earlier advertising liveries as carried on 2550 in 2000-1.

2550 is seen in this photo at East Croydon and is leaving the stop with a line 1 service from Elmers End to Wimbledon on 30th May 2001. It is carrying the distinctive colours of First Group who have been involved in the operation of Tramlink since opening (firstly as part of the consortium who constructed and ran the system and then as the operators under TfL). This livery was applied in April 2000 and was carried by the tram until October 2001 when it reverted to standard fleet livery. 2550 itself was delivered to Croydon’s Therapia Lane Depot on Monday 10th May 1999 and was unloaded as part of an event where family members of staff were invited to view the unloading process. Today 2550 once again carries now standard liveries with a yellow based livery promoting Tramlink Safety. 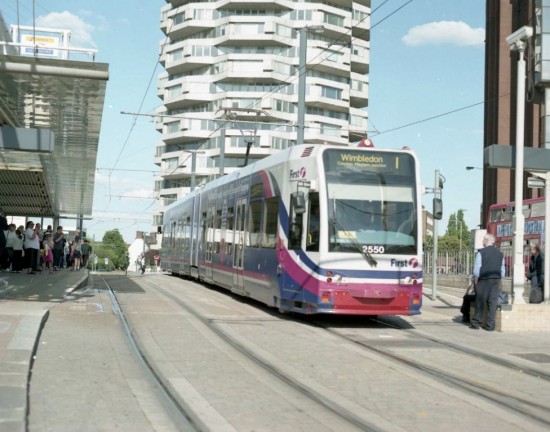