Today we have two “Pictures in Time” as we take a look at Blackpool’s Standard 147 in 1962 and 2009 – of course for a large period of time between these two years the tram was in the USA but both these images come from its time in Blackpool.

The first photograph shows Standard car 147 in 1962 in all day service at Cabin where it has just had the trolley turned ready for the return journey to Pleasure Beach. This tram built in 1924, was the first Standard car to have the destination display above the drivers window. This was done to improve visibility for prospective passengers during the wartime blackout. Until then all Standard cars had the destination display above the upper deck front window. It was withdrawn from service in 1966 and made the journey across the Atlantic Ocean in 1967 to the Trolleyville museum in Ohio but never operated there. It returned to Blackpool in 2000 and after a major restoration returned to service in 2002. It has subsequently been named ‘Michael Airey’ in honour of the person who spearheaded the project to bring the tram back to the UK. The tram is now part of the heritage fleet in Blackpool. Alongside 147 is an unidentified English Electric car on service number 1 from North Station to Cleveleys. This was the only numbered tram route in Blackpool . The Dickson Road track, the last inland section of tramroute, would be abandoned the following year in October 1963. 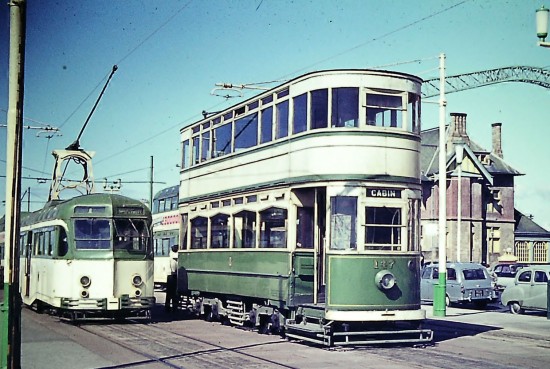 The second photograph shows 147 in service in November 2009 on a charity shuttle service between Pleasure Beach and Tower, all the fares being donated to charity. The driver was dressed as Santa Claus! 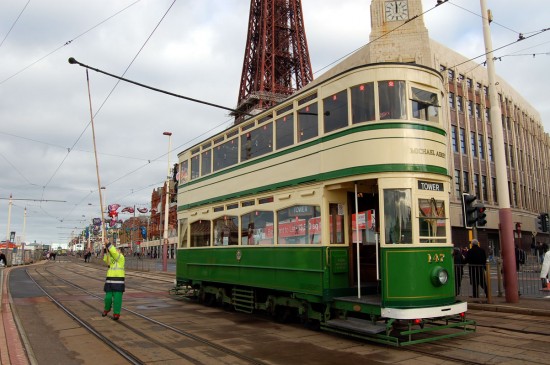 (Both Photos by John Hampton)