After 12 months of disruption Manchester Metrolink services are once again calling at Victoria although for the next few days this will be serving as a terminus for trams from Bury and Rochdale. Single line running has been in operation through Victoria since February 2014 to allow major transformation work to take place but from the start of service on Wednesday 18th February this was sufficiently completed to allow the stop to re-open.

Until Saturday 21st February Victoria will be a terminus for services running from Bury and Rochdale to allow track work to be completed along Balloon Street. East Didsbury services will be diverted to run to Piccadilly with all services from Altrincham also running to Piccadilly for the next few days. From Saturday 21st February normal services will be resumed which will include trams from Ashton-under-Lyne running to Bury with the Eccles line once again using Piccadilly as its terminus. The Abraham Moss shuttle will also end. 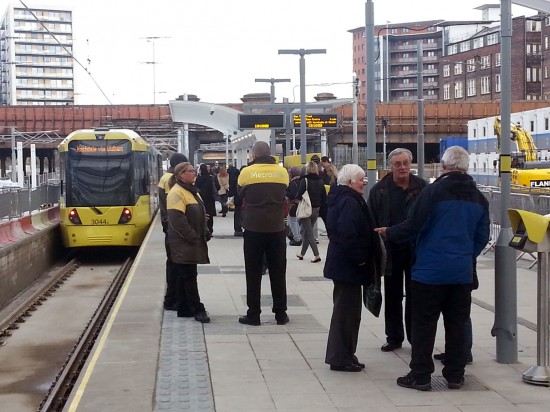 3044 at Victoria on 18th February when the stop was in use as a terminus. (Photo: Mark Sheppard)

1 Response to Welcome back Victoria!