We seem to be referring to momentous occasions at the Heaton Park Tramway on this website with great regularity of late, mainly thanks to the incredible progress made on the construction of a second tram depot at the park in recent months. On Tuesday 17th December, yet another milestone was achieved when Manchester 173 arrived at Heaton Park, becoming the first passenger tram to take up residence inside the new Lakeside Depot just two days after Blackpool railgrinder 752 was first stabled there.

Although Heaton Park is considered to be ‘home’ for Manchester 173, this is actually the first time that this particular tram has ever been at the preserved line in its native city. During its time in preservation the car has moved around a few different locations in the local area, and most recently has spent many years as a static exhibit at the Greater Manchester Museum of Transport at Boyle Street. Unfortunately, this museum has lost one of its storage sites and as a result 173 needed to be removed from the museum to enable other items to be accomodated on site. Thankfully, this has co-incided with the new depot at Heaton Park being sufficiently complete for the tram to be securely housed inside.

The haulage firm who had been hired to move the Manchester tram arrived at Boyle Street very early on December 17th, although the process of extracting it from its long-term resting place was a difficult one as the car had to be moved sideways a few times before it could eventually be maneuvered out of the museum and depart for its new home. It was therefore not until about 4:00pm when Manchester 173 finally made contact with the rails at its new home tramway for the first time, assisted by several volunteers from the Manchester Transport Museum Society. It was then shunted to the rear of the new building, with Blackpool Vanguard 7/619 being placed in front of it. However, some further shunting is likely to take place soon to make the best possible use of the available covered accomodation, and also to allow work to commence on a winter overhaul for Manchester 765 ahead of this tram’s centenary year.

A considerable amount of restoration work has been carried out on 173 some time ago, and it is an extremely attractive static exhibit. It is a quite significant tram, as one of only two complete uncanopied open top trams in Britain (the other one being Newcastle 114 at Beamish). However, fairly extensive work will be required to complete it to an operational standard, and so it is not expected to operate again for the forseeable future. However, having this magnificent local open-top tram finally at Heaton Park is without doubt a fantastic early Christmas present for the MTMS, and hopefully its arrival will lead to an increased level of interest in it, which could prove to be the incentive needed to complete its restoration to working condition. Meanwhile, it is hoped that the opportunity will be taken next year to display 173 alongside Manchester 765 and Stockport 5, showcasing the impressive collection of Manchester cars now based at the tramway. 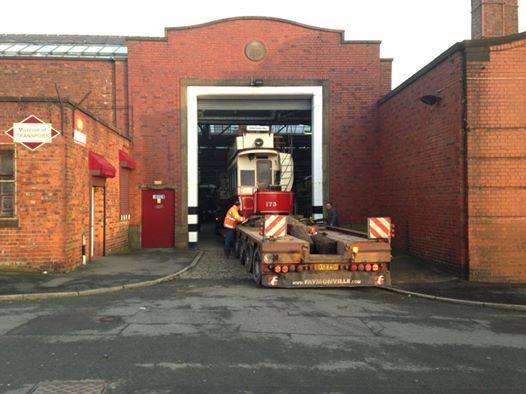 Let there be light! After spending around two decades inside the museum at Boyle Street, this scene captures the glorious moment when Manchester 173 emerged into the sunlight, en route to its new home at Heaton Park. (Photo by Martin Strickland)