Posted on Tuesday 17 December 2013 by Gareth Prior

The Manchester Metrolink T68 fleet has decreased by one further example with the news that 1009 has now run its last journey. The vehicle had last run back on 2nd December when it operated on the Eccles line and it had been stopped awaiting tyre turning and a traction motor change but it has now been decided not to undertake this work.

1009 currently remains at Queens Road Depot where 1002 also still resides following its withdrawal last month. Despite rumours suggesting the rest of the T68 fleet would be withdrawn in one go at the end of Tuesday 17th December it now appears that this will not be the case although at least two further examples are expected to be withdrawn by the end of 2014 – and it could be higher than this. How long any examples remain in service next year is at the moment not clear.

What is clear though is that the two remaining serviceable T68As – 2001 and 2003 – will be retained into 2014 to aid the network during the Victoria Station service alterations, now due to commence at the end of February/start of March.

Meanwhile M5000s 3075 and 3076 have now moved to Oldham town centre for use on driver training, and they are running as a double unit with 3071 remaining in use as a single. 3070 has now returned from Oldham and is back at Queens Road where it is expected to be prepared for entry into service. 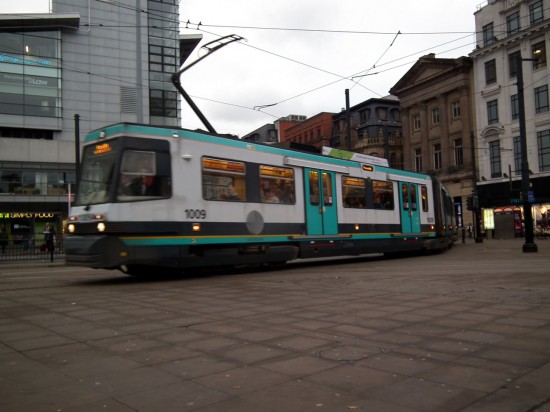 1009 is seen arriving in Piccadilly Gardens on 1st December whilst running on the Eccles service. It would run its last passenger journeys just one day later and has now been officially withdrawn. (Photo: Steve Kemp)