For the next few weeks our modern tram edition of “Picture in Time” will be heading back to Manchester Metrolink as we take a look at some of the original trams in action.

We start off with this photo taken at the city end of Victoria Station as we see two of the original T68 trams passing as they head in opposite directions. Unfortunately, it isn’t quite possible to identify the tram which is heading toward the camera with G-Mex Direct on its destination blind so we can’t with any confidence say what number it is although with the date of the photo down as 25th February 1992 it does rule out the higher numbered trams as they hadn’t been delivered yet!

With the photo dated as 25th February 1992 this is before any public services had run on the system (that would still be six weeks away) so presuming the date is correct this makes this photo taken during a test/training run. It has just come through the “hole in the wall” at Victoria – a location much changed today. 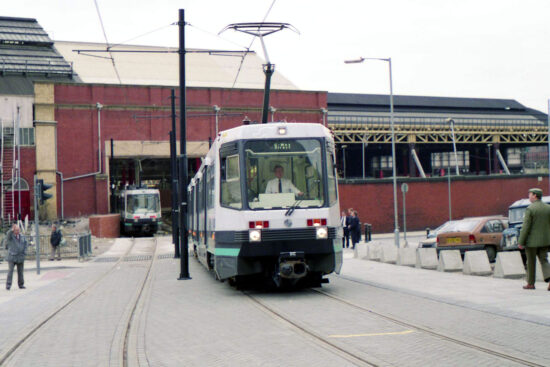