Today we take another trip to Nottingham Express Transit to see a tram alongside a train once more.

The terminus at Hucknall on Nottingham Express Transit has two platforms for tram services and a solitary platform for the Robin Hood Line service. Of course, the railway platform is not a terminus as the line continues on the way to Mansfield. With the two modes platforms adjacent to each other this gives more opportunities for photos of two different forms of transport as seen in this image.

This is 3rd October 2014 with NET Incentro 213 getting ready to depart with a service for Station Street – this being before the extensions to Toton Lane and Clifton South were open. Standing at the railway platform on the far side is an East Midlands Train service heading to almost the same location as it will end up at Nottingham station. The lead unit here is 153 357 with a second DMU coupled although this can’t be identified in the photo. 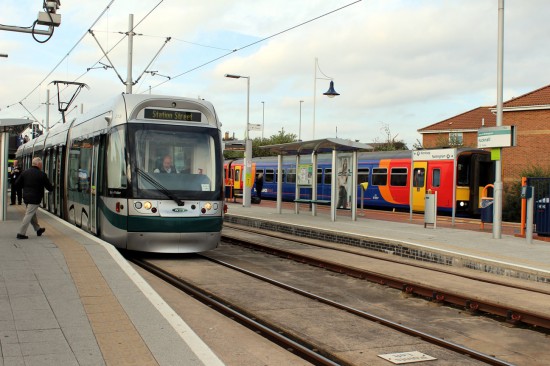