Those two trams in question are 17 – now renumbered as 15 and a fully enclosed saloon – and 7. 17 was originally built in 1988 as a Manx Electric Railway style crossbench car and was really the first time that the tramway attempted to cater for visitors in wheelchairs as it had the capacity for some seats to be removed to carry wheelchairs. However, with the introduction of 9, 10 and 11 at the turn of the century this feature was rarely used and so it was decided to convert the tram into a fully enclosed saloon. Withdrawn from service at the end of 2015 work continued through 2016 before it entered service as 15 in December 2016 and now provides an additional vital enclosed car with the increased winter service on the tramway.

The other tram seen in these images is no. 7 which last ran in service in 2007 before being withdrawn for a full overhaul which although work did get underway has rather stalled in recent years. Dating all the way back to 1958 7 was built for the operation at Eastbourne to 2 foot gauge and was converted to the Seaton gauge of 2 foot nine inches and entered service for the first time in Devon during 1976. It remained active until the previously mentioned withdrawal and can now be found at the very back of the depot.

In both of the below images we see 17 and 7 stationary at Colyton with the double decker at the stop and a few potential passengers milling about ready to board. Photos taken on 11th July 1990. 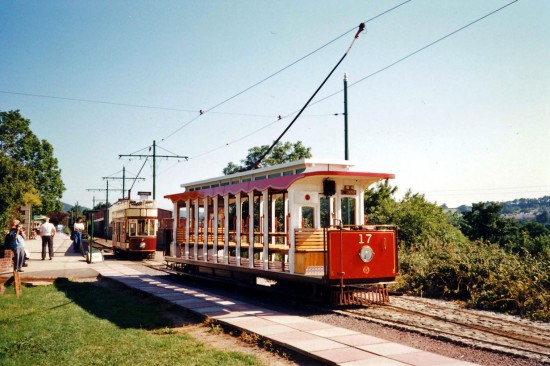 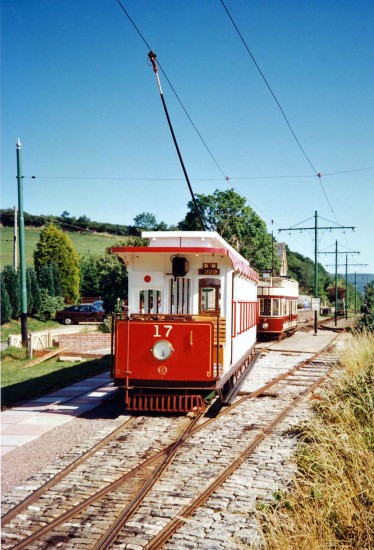