Posted on Wednesday 24 July 2019 by Gareth Prior

They don’t need much of an excuse in Blackpool to have intensive heritage tram action but with Fleetwood Tram Sunday (or Transport Festival if you prefer) taking place on Sunday 21st July the whole weekend saw another Gold timetable in operation with this one having the added bonus of lots of journeys all the way to Fleetwood meaning it was very much two days for those who like lengthier trips on the heritage trams.

As has become the norm in 2019 a Gold weekend was preceded on the Friday (19th July) with a four tram service between Pleasure Beach and Bispham. With both Boat Cars originally due to run the weather had other ideas but there was still plenty of interest with the first pre-advertised use of Bolton 66 as well as the rare sight of Brush 631. These two trams were joined by regular performers Railcoach 680 and Balloon 723 with Standard 147 also been used briefly in the morning before 66 came out.

Onto the main weekend and the special timetable in operation saw the majority of journeys run to Fleetwood – Fleetwood Ferry on the Saturday and Fisherman’s Walk on the Sunday. Six trams were due to run on Saturday 20th July with the Western Train making a very rare appearance on standard heritage tours alongside Bolton 66, Brush 621, Centenary 648, Railcoach 680 and Balloon 723. 66 was replaced by Standard 147 during the day whilst regular Shop Tram Balloon 711 also operated a trip from North Pier/Tower to Bispham and back at the end of the day (which was included on the timetable this time around).

Tram Sunday itself and there were seven heritage cars in normal service during the day which included Boat 227 operating Prom specials. The other six trams all ran to Fisherman’s Walk on several occasions and the Balloon Car dominated the allocation as is usual on this event because obviously a Balloon has a higher capacity than other trams in the fleet. 701, 713 (which suffered a fault during the day but stayed out after a delay), 715, 717 and 718 were all in service and they were joined by Standard 147. In addition there were two heritage cars on display at Pharos Street with single deckers Brush 621 and Railcoach 680 the chosen pair for 2019 and let’s not forget the Shop Tram either – Balloon 711 once more stabled at Fisherman’s Walk this time and it did run a passenger trip to North Pier/Tower at the end of the day.

Heritage trams will continue to operate daily throughout the summer holidays with the next Gold weekend scheduled to be over the August Bank Holiday weekend which will include a Depot Open Day. 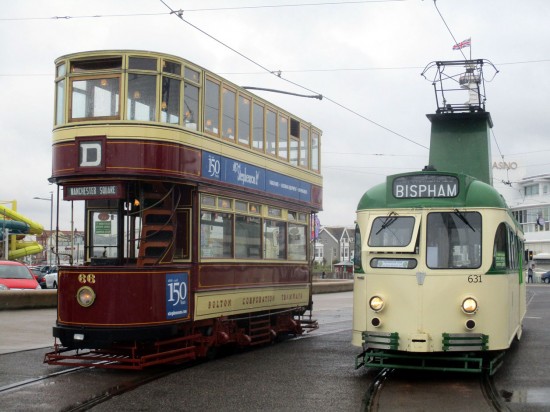 The two “star trams” of Friday 19th July were Bolton 66 – having only recently returned to service after overhaul – and Brush 631 – a tram which has spent various periods off the road so far in 2019 – and we see both sitting on the loop at Pleasure Beach. 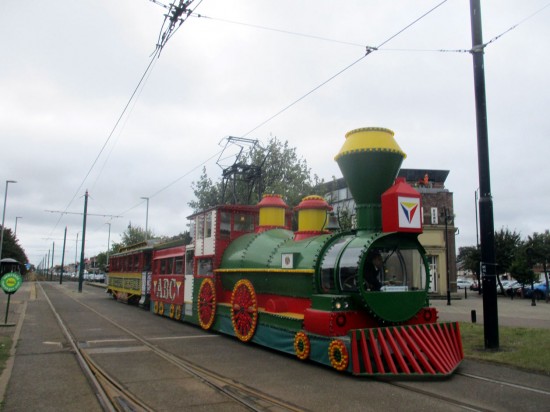 Probably the highlight of Saturday 20th July was the use of the Western Train on heritage tours with the tram operating through to Fleetwood on four occasions. On one such trip we see the tram here at Fisherman’s Walk. 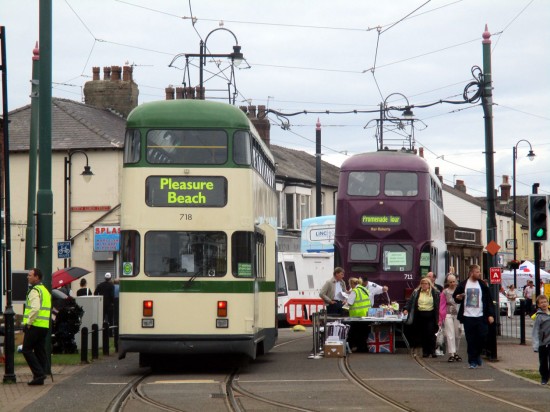 Fisherman’s Walk on 21st July and Shop Tram Balloon 711 is seen in the background as Balloon 718 awaits its return to Pleasure Beach. 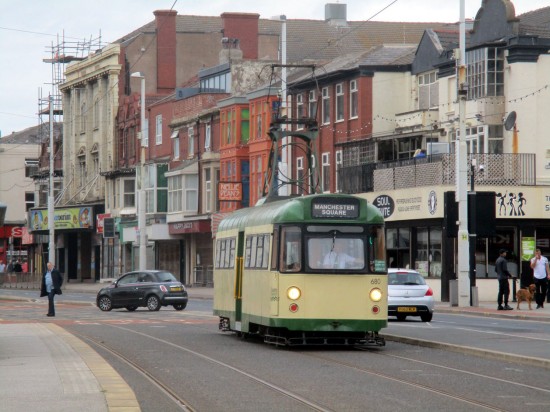 Railcoach 680 returns to depot after display at Pharos Street. (All Photographs by Rob Bray)