Blackpool Transport’s last remaining Brush Railcoach, car 631, has recently lost its all-over advert for Walls Ice Cream. The tram is currently being prepared for a full repaint in light of its new status as a member of the heritage fleet, and is expected to shed its bright red paint in favour of a more appropriate green and cream livery.

631 was last repainted in 2007 when it adopted its familiar advert livery. Although the Walls contract was transferred to modified Balloon car 720 in 2010, 631 continued to run in this guise, and was even revived for use on heritage tours in summer 2012. The tram was actually one of the most regularly used heritage cars due to the dismal summer, but its peeling advert vinyls did not really make for an appealing vintage tram to the general public. It is therefore very pleasing that 631 is to be repainted this winter, confirming its value as an important member of the heritage fleet, and allowing enthusiasts to enjoy a Brush car running in Blackpool for the forseeable future. In a break from tradition, 631 was moved to Starr Gate depot after the main 2012 season and has been rubbed down there following removal of the advert vinyls. The Brush car could therefore become the third tram to be repainted at Starr Gate, following on from ‘B Fleet’ cars 719 and 711.

It remains to be seen what former livery 631 will receive; thanks to a thorough mid-nineties rebuild, the tram sports modern features such as trafficators, blade lifeguards and a completely enclosed pantograph tower. The most appropriate style for this tram would therefore be the 1990s fleet livery as carried by sister car 630 at Crich – although 631 carried a plainer version of this layout, lacking the green skirt. Whatever paint scheme is chosen though, 631 should certainly look much better following its repaint than it did during 2012, and Blackpool Transport deserve to be commended for investing in another tram to give it a secure future on its native rails. 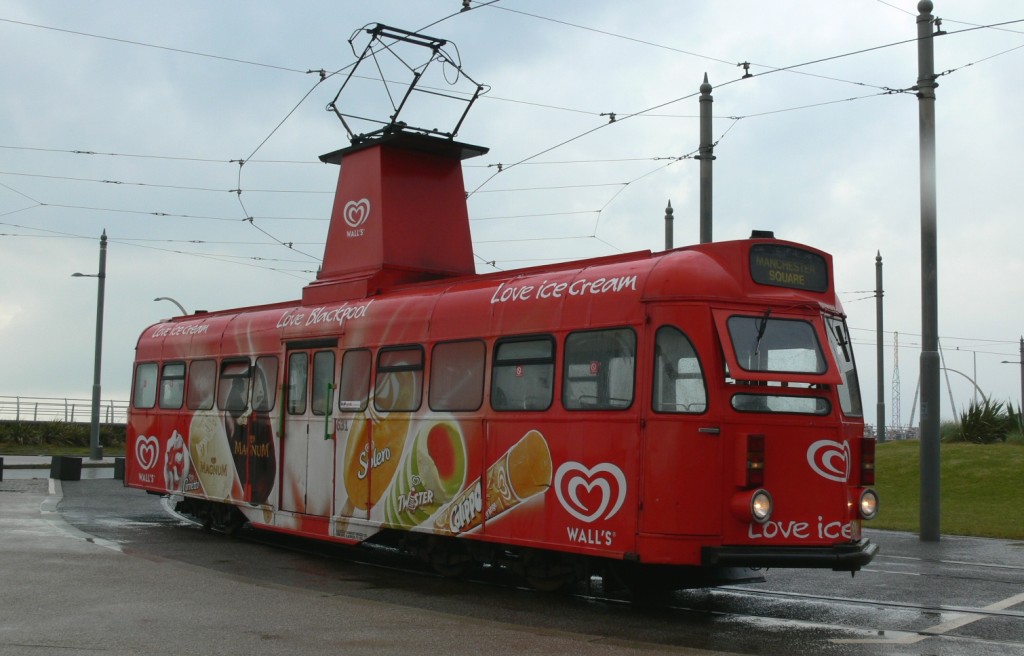 A classic scene with 631 in its Walls advert at Pleasure Beach in September 2011. Note how badly the vinyls on the lower panels were deteriortaing by this time. (Photo by Andrew Waddington)