A Blackpool Coronation car in Heywood!

In an unexpected but extremely welcome development, Blackpool Coronation car 663 departed Rigby Road depot on the morning of Wednesday 22nd August, bound for the Heywood workshop premises of Ian Riley Engineering. There, extensive work is to be carried out which will bring the tram much closer to a return to service than would be possible in the same timescale at Blackpool.

663 has been a well-travelled tram since it was withdrawn from use in the 1970s, being stored in various locations around the country before finally finding its way back to Rigby Road in 2013. Prior to this move some work had been undertaken on the car by the Lancastrian Transport Trust, but now the restoration of the tram can really get underway! The first phase of work, which will be carried out by the contractors, will see a full bogie overhaul and a complete re-wire undertaken. The whole project to restore 663 to running order is being assisted by an anonymous private donor who had expressed a particular desire to see this car run again.

With limited resources available at Rigby Road to overhaul trams, the opportunity is being taken to transfer 663 off-site to an expert vehicle restorer in order for this very exciting restoration project to progress, whilst other work continues uninterrupted back in Blackpool. With the Fylde Transport Trust also helping out by completing the restoration of English Electric Railcoach 279, this step will enable three major projects to be tackled at the same time – exciting times are certainly ahead for Blackpool’s heritage fleet! No indication has been given of when 663 will return home or how long the restoration is likely to take, but considering that the tram has not carried passengers for more than forty years, it is quite amazing to think that a return to the rails is now looking closer than ever before for this often forgotten Coronation car.

663 was loaded up on Blundell Street and moved to Heywood by Reid Freight, who were also responsible for the recent move of 279. We look forward to seeing how work progresses in the months ahead on a tram that many of us would never have expected to ride on in Blackpool not so long ago! 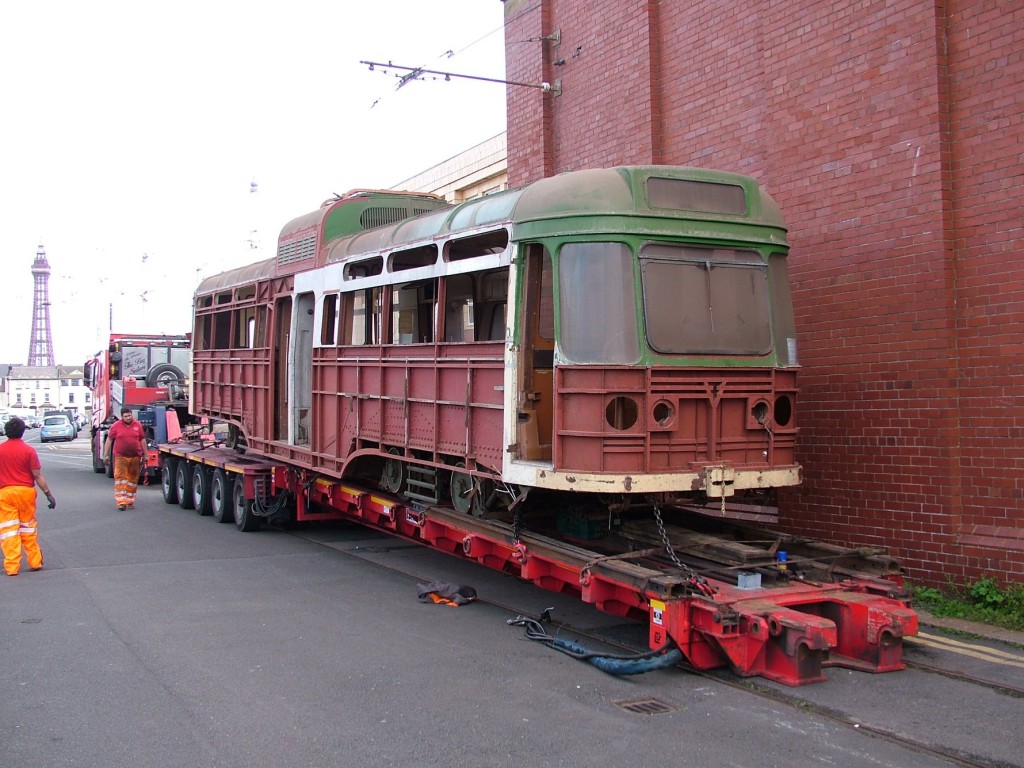 On the move again, Coronation 663 is seen being loaded up for departure on Blundell Street on 22nd August. Although it appears derelict, some restoration work has already been carried out and the Coronation cars are so well built that the body frame remains in a decent condition. (Photo courtesy of Blackpool Heritage Tram Tours)