Railcoach 279 restoration to restart this year?

The Fylde Transport Trust (the new name for the Lancastrian Transport Trust) have recently been teasing some potentially interesting plans for its tramcar collection on their Facebook page. Although transferred to Rigby Road under the care of Blackpool Transport’s Heritage Tram Tours, many trams remain in the Trust’s ownership – and one vehicle which they have exciting plans for, is English Electric Railcoach 279.

279 last ran on the Blackpool tramway in 2008 as 679, before moving to the LTT’s Brinwell Road premises where work on restoring the tram to its original shape with pointed cab ends commenced. This was originally meant to be completed in time for the tramway’s 125th anniversary celebrations in 2010 – needless to say this did not happen, and the tram was later returned to Rigby Road, but has sat untouched since then. However, it is hoped to resume the work on returning 279 to its original shape later in the year, and the Fylde Transport Trust have announced plans which are being discussed to carry out further work on the car away from Rigby Road, which could see it moved by road again this summer.

Extensive work has already been lavished upon the tram, with its flat ends removed and new streamlined end framework fitted. Other attention carried out some years ago included the replacement of its modern hopper windows with more traditional half-drop window units, and the removal of its fixed bus seats which were replaced by swing-over seating. However, there remains a great deal of work to be completed and if even some of this can be tackled elsewhere, it will take considerable pressure off the already stretched workforce at Rigby Road, and must surely increase the chances of this tram running again in the next few years. Despite being the largest class of tram ever to run in Blackpool (there were once 45 of them), no English Electric Railcoach has been retained in anything like original condition, despite the preservation of numerous examples of the similar Brush cars, so to have 279 running in this guise would be a great achievement and a worthy addition to Blackpool’s heritage tram fleet. 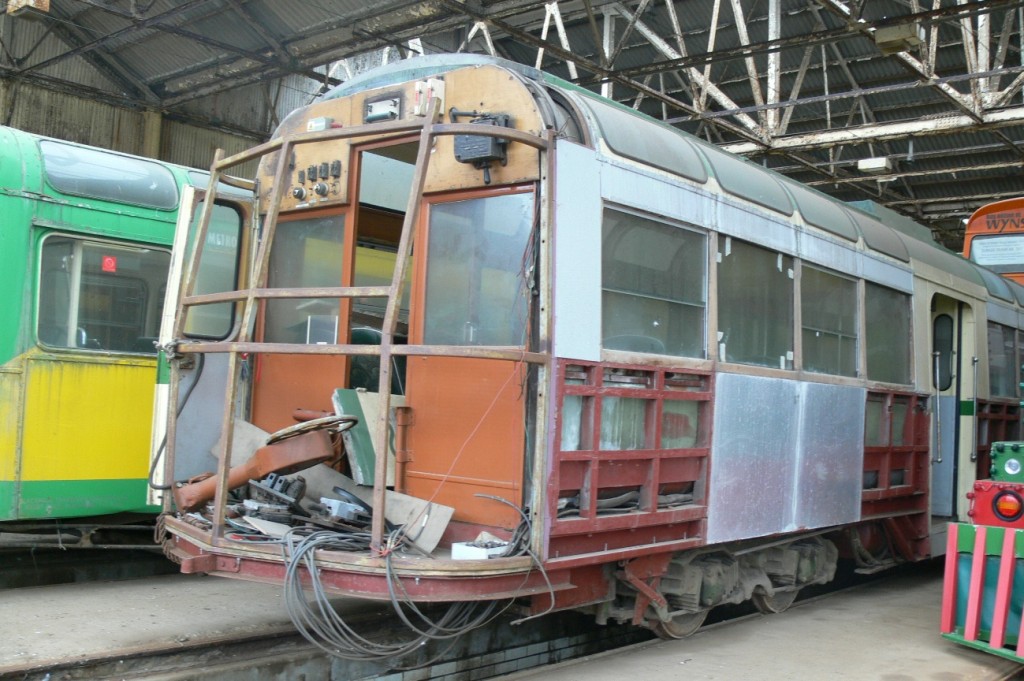 It may look a mess, but this image of 279 shows some of the work already carried out to return it to its original shape having spent the latter part of its working life as a towing car with flat ends. (Photo by Andrew Waddington, with permission from the Blackpool Heritage Trust & Blackpool Transport Services Ltd.)

3 Responses to Railcoach 279 restoration to restart this year?