Off to Blackpool again for this instalment of Picture in Time. This time around it is Jubilee Car 762 which interests us which a couple of photos dating from 2004 included.

Jubilee Car 762 was the second Balloon Car to be converted for one man operation although there were a number of differences in the rebuilt, the most notable being the inclusion of a centre exit to the tram following experience of slow loading/unloading on 761. 762 had started off its life as Balloon 714 – withdrawn in 1971 – and had been stored at Blundell Street Depot for a number of years before being selected for the one man operated project. The tram entered service in its new condition in May 1982 in the standard green and cream livery but by the time we catch up with the tram in 2004 fleet livery is a distant memory. The tram survived in service in Blackpool until the penultimate day of traditional tram operations when it was withdrawn to prepare it for transport to Crich where it became part of the national collection and is part of the operational fleet there.

In this first view we see 762 at Bold Street, Fleetwood working on the timetabled service to Starr Gate. The date is 9th September 2004. This advert for Unison had been applied back in 2002 and was nearing the end of its life as it was to be removed during the following winter during a rebuild for the tram. 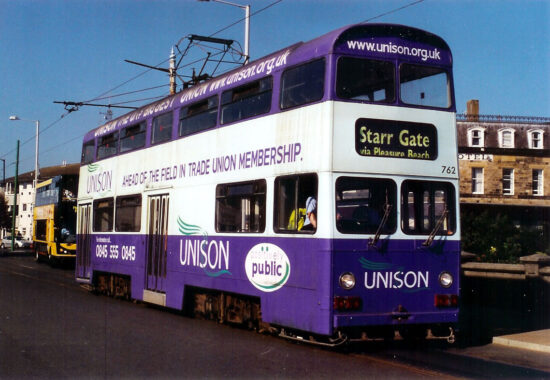 And then on 11th September 2004 we see 762 at Gynn Square. This was the cavalcade to mark the 70th anniversary of the English Electric streamlined trams with 762 chosen to display the one man operated rebuilds. 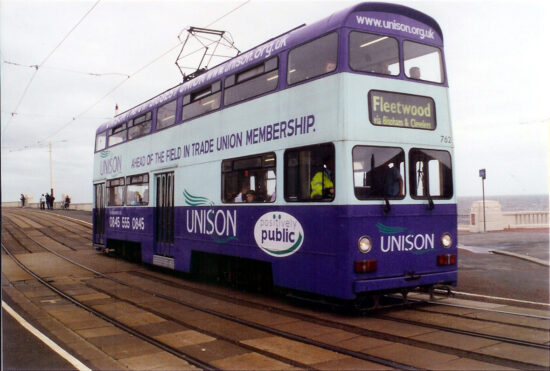