Posted on Wednesday 14 September 2016 by Gareth Prior

Over the past few years the main enthusiast event at Crich has given us on loan trams and trams displayed outside from the on site collection but for 2016 Tram Day – as it has now been christened – a first was achieved with a tram from the Clay Cross store the star of the day in its only public appearance at the Crich Tramway Village ahead of a move to Beamish. That tram was Oporto coal tram C65 which was posed on the depot fan both alone and with some friends old and new throughout the day. But Tram Day was so much more than just the one tram and the day also saw many other rare occurrences.

Sadly after many years of good – even if not wall to wall sunshine – weather for the event (or its equivalent) the 2016 Tram Day was greeted with a rather grim forecast which in the main proved to be correct. Despite the morning being rather wet (which had seen a change in tram allocations with the open toppers mainly been confined to afternoon running) this did not dampen the event although did mean not everything which has been planned to be outside on display was able to play its part on the day.

The undoubted star of the day was Oporto C65 which was formally handed over to Beamish during the afternoon. Although C65 had arrived in the UK back in 2005 it had remained stored at Clay Cross ever since having not been displayed at Crich at all in that period. A recent review of parts of the collection deemed the tram surplus to requirements and it was agreed to transfer ownership to Beamish who will be able to restore the tram back to operational conditions. Throughout the day C65 was to be at the forefront of the famous Crich photo line-ups.

The first of these in the morning rain had the theme of Works Cars and saw many of the extensive fleet of these all important vehicles share the limelight. Of course the usual suspects of the Blackpool Electric Locomotive, Cardiff 131, Croydon Tramlink 058 and Sheffield 330 all featured but they were also joined by some of the rarer vehicles including Crane no.4, diesel locomotives GMJ and Rupert and Leeds Tower Wagon 2.

In the afternoon and after the works cars had been put away two photo line-ups were displayed on the depot fan. Firstly C65 was joined by its fellow former Oporto residents in horse tramcar 9 and electric tram 273 and then over by the Traverser it was a Chesterfield line-up with horse car 8 and electric tram 7 posed for photos. As well as C65 seeing a change in its ownership 8 was formally transferred into the Crich collection having previously only been on loan from the Science Museum (the South Staffordshire truck was also officially transferred to the national collection as well).

It wasn’t just on the depot fan that there were unique photo opportunities as the day had started with the three operational Leeds trams displayed outside The Red Lion. These were of course 180, 345 and 399. There was also due to be a 1920s Blackpool line-up featuring recently repainted Standard 40 and Toastrack 166.

Away from the static displays 18 different passenger trams were used in service with Blackpool 40, London County Council 106, Metropolitan Electric Tramways 331, Leeds 345 and London Transport 1622 in use all day. They were joined by Chesterfield 7, Blackpool 167, Leeds 180, Oporto 273, Leeds 399 and Sheffield 510 in the morning and London United Tramways 159, Blackpool 166, Blackpool 236, Blackpool 762, Liverpool 869 and Glasgow 1068 in the afternoon. Berlin 223 006-4 also operated a few journeys as per its normal daily timetable.

The afternoon also saw Works Cars Blackpool Electric Locomotive and Cardiff 131 running on the mainline offering rides to members of the public along the whole length of the tramway between Town End and Glory Mine.

As the day started to draw to a close there were a few more surprises in store starting off with Blackpool Brush Railcoach 630 which operated a test run from the depot to Glory Mine and back. 630 had not operated in service this year and has spent the summer in the workshops undergoing attention; with the work seemingly completed it was decided to give it a test and this was obviously a success as just two days later it was back in service! One of the other residents in the Workshop Glasgow 22 was also seen operating under its own power being shunted around the depot; this too has recently been undergoing testing ahead of its eventual return to service.

With London Transport 1622 being withdrawn from service at the end of the event awaiting workshop attention it was decided that the last passenger trips of the day would be of a London theme. But rather than just letting 1622 run on its own all four of the London trams set off for Glory Mine! Led by London United Tramways 159 and followed by Metropolitan Electric Tramways 331 and London County Council 106 with London Transport 1622 the four trams headed to Glory Mine and after photos returned to the main museum site finally arriving back at around 1845 and bringing to an end another successful Tram Day at Crich.

The rain may have tried to dampen proceedings it still didn’t stop another excellent event from pulling out all the stops. As if often the case at the end of one of these events you are left thinking how will they equal that in 2017?

* A full Photo Gallery from Tram Day will follow on British Trams Online later in September. 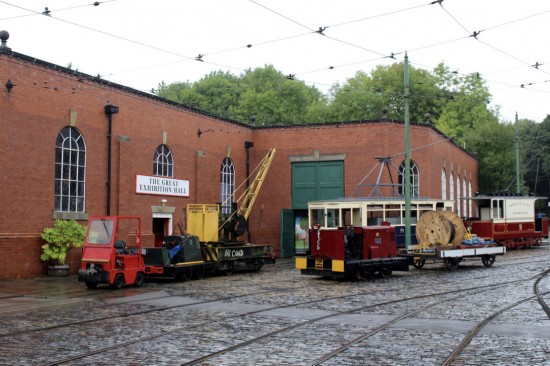 Part of the Works Car line-up including the Crane, GMJ and Sheffield 330. 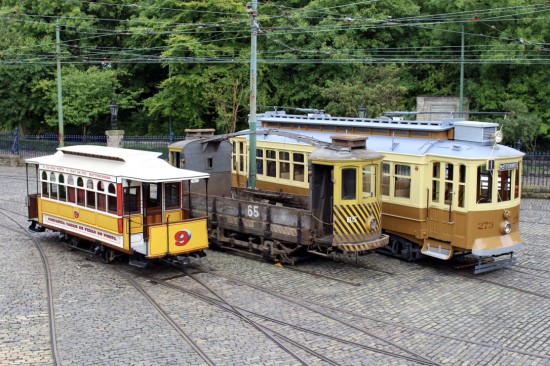 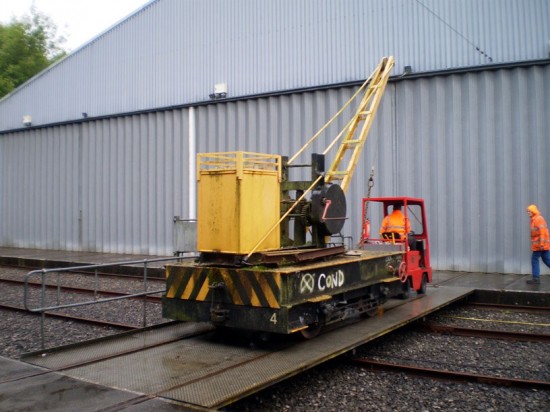 The Crane is moved on the Traverser in the morning ahead of the Works Car line-up. 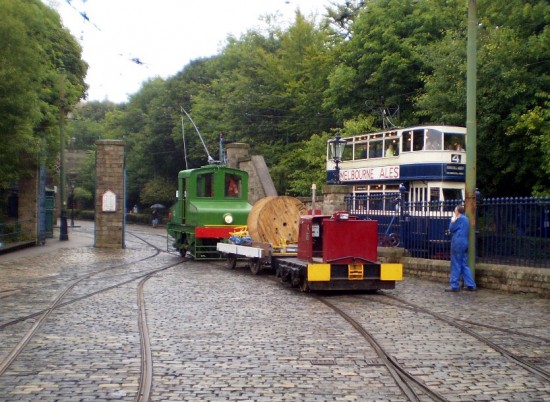 The Blackpool Electric Locomotive moves some of the Works Cars as Leeds 345 passes on the mainline. 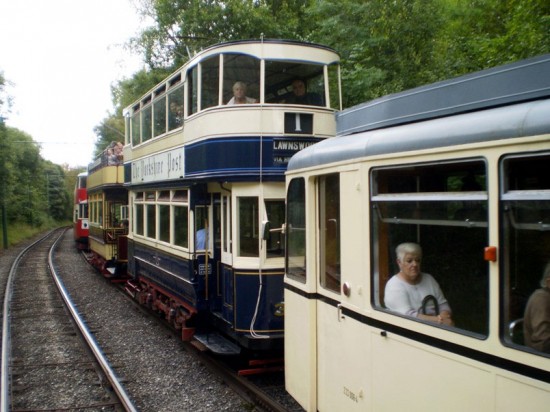 A common sight at Tram Day is queues of trams. In this view at the start of the single-line section Berlin 223 006-4 and Leeds 345 lead the way. (Photographs x3 by Peter Narramore) 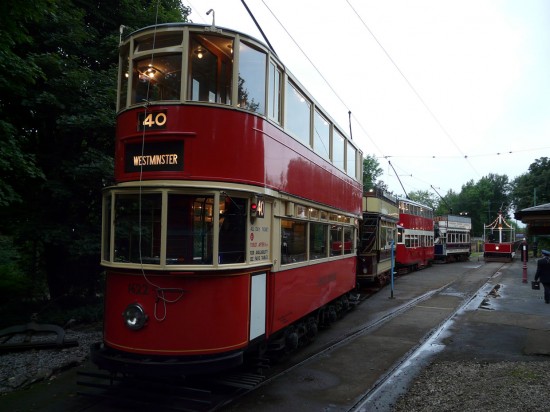 The end of the day at Wakebridge and the four London trams running the last service are met by Blackpool 166 heading back to depot. (Photograph courtesy of Crich Tramway Village)

This entry was posted in Crich Tramway Village, Event Reviews. Bookmark the permalink.