It’s modern Sunday again on British Trams Online as our latest trip into the archive sees us visit Manchester for a view of T68 1024 on 6th September 1993 with services on the original Bury and Altrincham routes now over a year in existence.

The subject of the photo is 1024 which was delivered to Manchester on 2nd April 1992 before entering service on 22nd May 1992. In December 2004 the LRV brought down the overhead between Prestwich and Heaton Park following the detachment of part of the carbon strip fitted to the pantograph head but apart from that there wasn’t a great deal to write home about for 1024 aside from the refurbishments as per its sisters. 1024 was withdrawn from service on 10th August 2013 and left Trafford Depot on the back of a low loader on 30th July 2014. However its destination was not Rotherham as it headed to Long Marston where it has become part of the UK Tram test fleet.

The photo below shows 1024 approaching St Peter’s Square with a service for Altrincham on 6th September 1993 whilst it carried the name “The John Greenwood”. 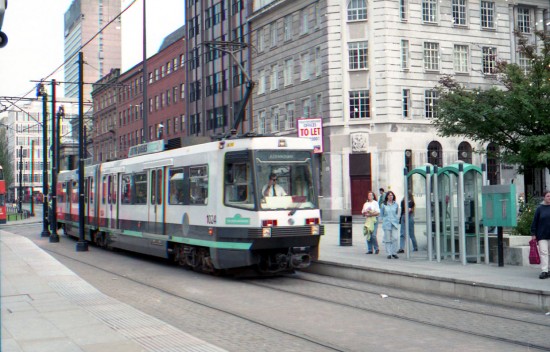