Posted on Sunday 22 February 2015 by Gareth Prior

With the Manchester Metrolink stop at Victoria now re-opened following a years closure as part of the “transformation” works in preparation for the construction of the Second City Crossing (2CC) today’s “Picture in Time” visits the old Victoria with an image of T68 1002 back in 1992 and as a bonus we also find the LRV elsewhere on the same day.

Victoria’s Metrolink stop opened to the public on 6th April 1992 and at that stage was in use as a terminus for services from Bury as trams returned to (Greater) Manchester. Victoria became a through route later the same month, on 27th April, as the line through Manchester City Centre to G-Mex was opened. It was not to be until 20th July that services from Victoria to Piccadilly – which was let us not forget one of the main reasons for the construction of Metrolink – commenced running. Victoria continued to be just a normal stop on the Metrolink network – albeit one which had a major connection with the national rail network – until 13th June 2012 when the line to Oldham Mumps was opened and Victoria became a major interchange for Metrolink services. With a vast increase in services through Manchester City Centre (as a result of many extensions opening all wanting to either travel through or into the city centre) the Second City Crossing was planned and construction of this is now underway. The 2CC will provide extra capacity in the city centre and will also enable services from the other side of the city to avoid the section along Mosley Street and through Piccadilly Gardens to serve Victoria direct.

Our first image today shows Manchester Metrolink T68 1002 at Victoria passing the now removed platform A during the testing period on 25th February 1992. 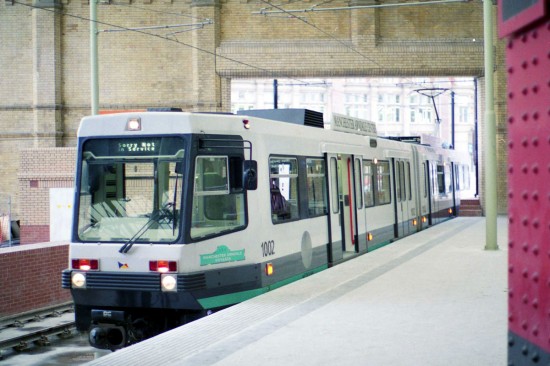 And in our second photo we find 1002 earlier on the same day along Market Street heading towards Victoria. 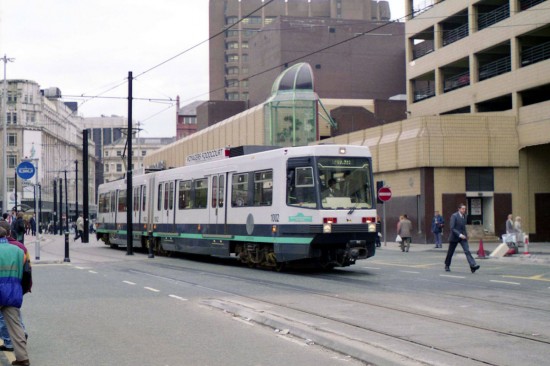 (Both Photos by Ralph Oakes-Garnett)