The Blackpool Heritage Trust have provided a welcome update on the current work being lavished upon Blackpool Balloon 715, which should enable this tram to be used in service this season for the first time since November 2011. Work is progressing very well and a milestone was reached on 5th February, when the tram was really brought back to life as it took power for the first time since returning home from a period of outside storage at Marton.

715 has been the main focus of the Rigby Road workshop staff over the winter so far, with work being carried out to reverse the effects of its time in the wilderness during its time owned by the Lancastrian Transport Trust. The tram had, unsurprisingly, suffered at the mercy of weather and vandals but this is now nothing but a memory. Several broken windows have now been replaced, and essential repairs to the roof which has been re-sealed. The seat cushions have been taken out and treated to a thorough clean, whilst the cab end framework has been strengthened and a damaged coupling box has been repaired, along with other minor body work such as the replacement of a few panels where necessary. Following the fitting of a pantograph, 715 was powered up inside the Electrical Compound, its old-fashioned bulb head and tail lights providing a delightful glow and bringing back fond memories of the days, not so long ago, when largely unmodified Balloon cars similar to 715 in its current condition ruled the tramway.

As an added bonus, and presumably by pure chance, 715 was stabled alongside Boat 230 which also wears the 1970s style green and cream livery. This scene is unlikely to be repeated, as 715‘s next move will be to the Paint Shop where it will be repainted in a different version of green and cream – apparently in a style not seen on the Blackpool tramway in a decade, which should certainly be something to look forward to! It is believed that the tram is on target for a launch into traffic at Easter, and should then become a regular sight on the promenade again for the first time in the modern era. With the recent announcement that three of the ‘B Fleet’ are set to be used this summer, this should give a total of seven operational Balloon cars in the fleet, creating plenty of potential for some interesting photographic opportunities! 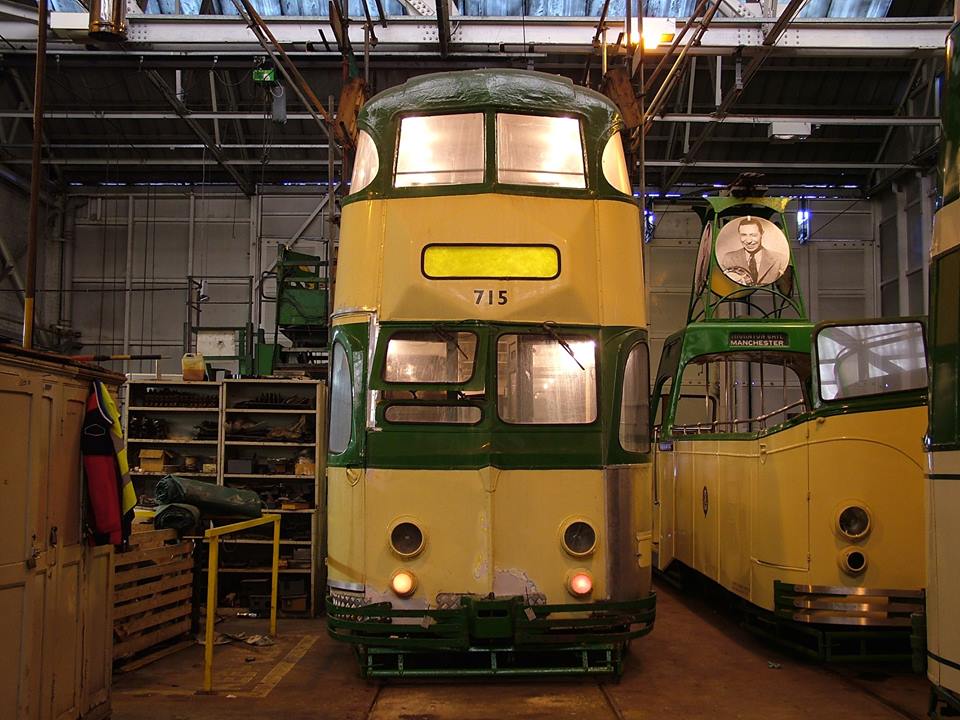