In Pictures: Manchester 765’s day in the city

On Tuesday 4th November, the 100 year-old tramcar Manchester 765 from the Heaton Park Tramway was displayed in the Manchester city centre. As well as celebrating its own centenary year, the tram was also there as part of the commemorative events to mark 100 years since the outbreak of World War One, and the opportunity was also taken to promote the future Cross City extension of Metrolink as well.

765‘s adventure began on Monday 3rd November, when the tram was placed on a low loader before leaving its normal home at Heaton Park. Prior to this, the tram had already received some remedial attention to its paintwork and to recognise the 100th anniversary of the First World War, decorations were added to its windows including a large crown, with banners proclaiming ‘God Save The King’ attached to the lower side panels. These were previously used on fellow Heaton Park resident Manchester 173 during its first visit to Yorkshire in the summer, being decorated to resemble trams which were used to encourage local people to sign up for duty in the armed forces. 765 also acquired large poppy wreaths hung around its headlamps on the dash panels at each end, whilst its familiar ’53’ route boards above the destination boxes were replaced by the year ‘1914’ to acknowledge its own centenary and the milestone in history being commemorated.

Once in position in Albert Square, 765 was carefully unloaded and mounted on a short length of track in the early hours of the Tuesday morning, and then remained in situ throughout the day where it could be inspected by members of the public. The appearance of the veteran tram attracted considerable interest and its big day out was even reported online by Granada News! The tram made a stunning sight in front of the impressive Town Hall, especially as the daylight began to fade allowing the lights used to emphasise its decorations to be shown off to fantastic effect. All day the car was manned by volunteers from the Manchester Transport Museum Society who were able to promote their activities as well as explaining the history of the tram to interested visitors. Particular reference has been made to the 2900 plus men from Manchester’s tramway department who bravely fought in the war, of which more than 300 sadly never made it back home.

Its day in the limelight over, the tram was loaded up once again and then made the short journey by road back to Heaton Park. There, it will retain its temporary decorations for a short while allowing it to operate in this guise on Sunday 11th November as an appropriate tribute to those who served their country and made the ultimate sacrifice a century ago. 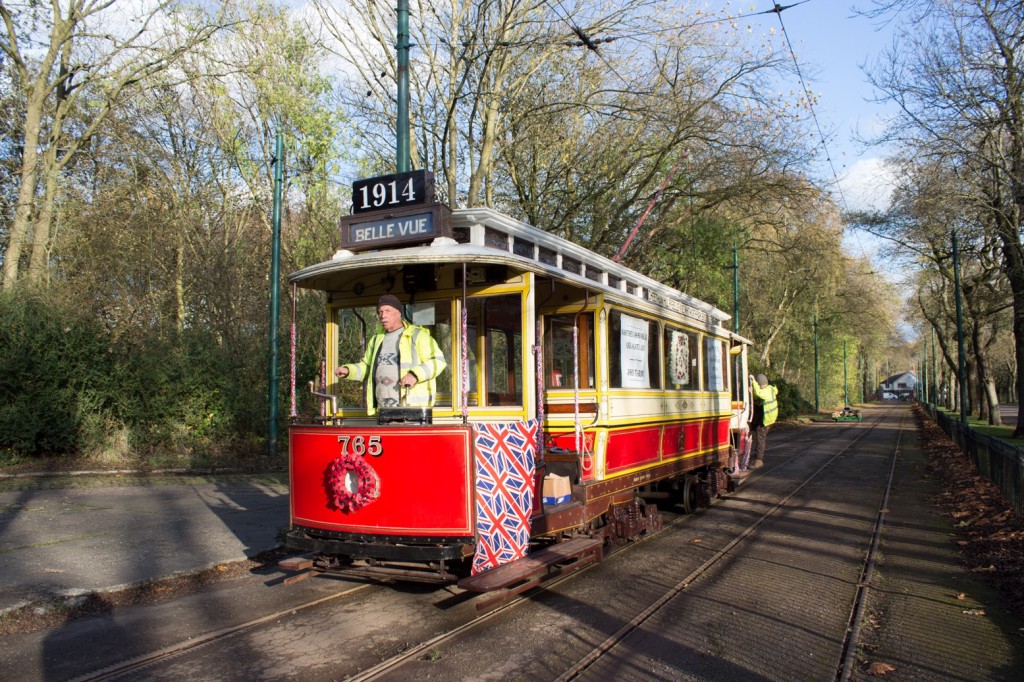 An amazingly sunny scene with 765 being shunted into position on 3rd November before its adventure began. Note the decorations already in place including a poppy wreath on the headlamp. 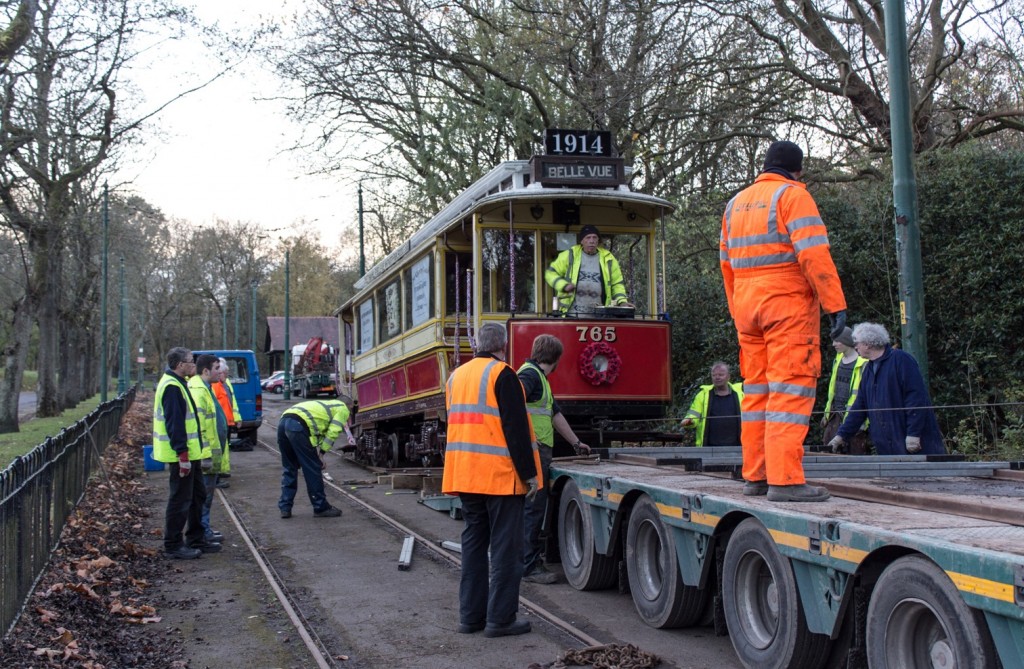 No stranger to lorries, 765 is seen being moved up the ramp onto the waiting low loader at the Middleton Road end of Heaton Park. 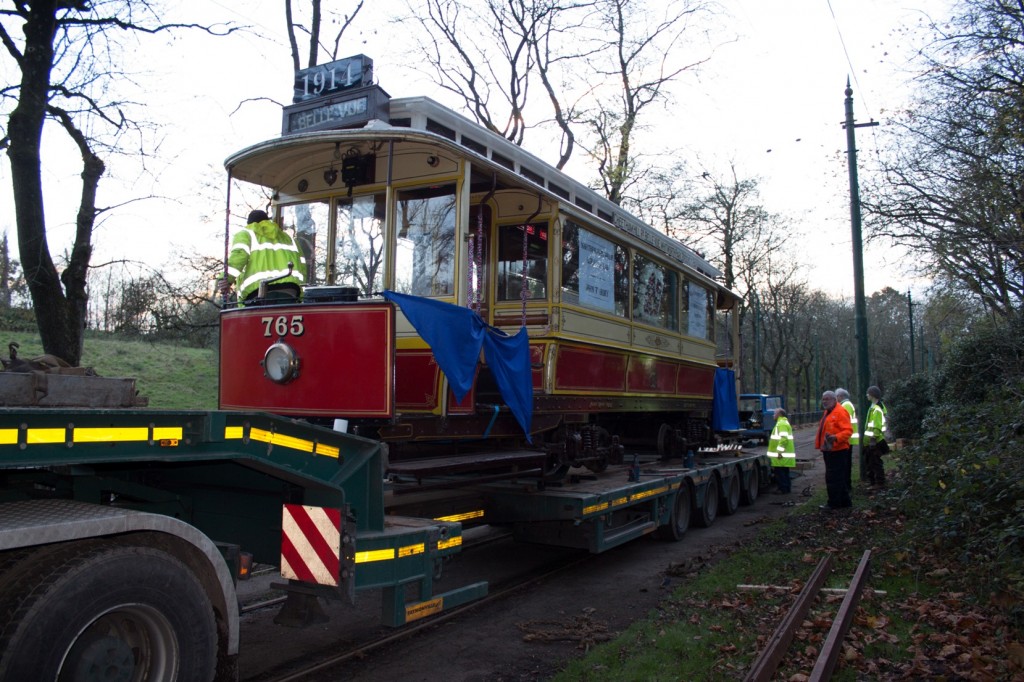 With the loading process almost complete we see the other side of 765 with a regal crown filling the central window of its saloon. 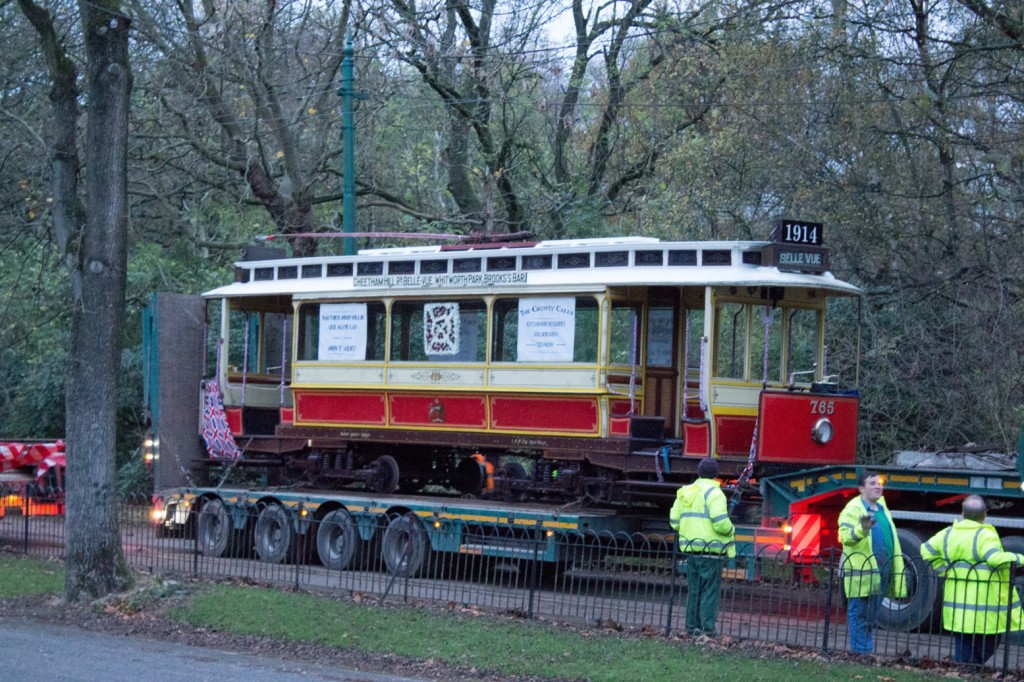 As darkness falls Manchester 765 is seen all loaded up and ready to depart. (Photos x 2 by Jack Clare)