Two vintage trams from the Merseyside area are looking forward to a more prosperous future following periods of disuse. Birkenhead 20 has recently returned to service on the Wirral heritage tramway, whilst at Crich, plans are afoot for Liverpool 869 to be returned to an operational condition.

It may be remembered that Birkenhead 20 was unable to run in service at last year’s Wirral Tram & Bus Show, having developed a fault at the beginning of the day. With volunteers at the Birkenhead tramway concentrating most of their efforts on completing the restoration of Liverpool ‘Baby Grand’ 245, 20 has had to wait for repairs to be effected but this has now been completed and the tram returned to use at the end of June. Hopefully there will be plenty of good weather over the summer to allow this popular open topper to see plenty of use and be enjoyed by visitors. Incidentally, its return to service and the imminent launch of Liverpool 245 will give Birkenhead a fleet of seven operational trams; not only will be this be an all-time high point for this heritage line, but will also give them the biggest running pool of any museum tramway in the UK with the sole exception of the National Tramway Museum.

Whilst on the subject of Crich, it is pleasing to report that the Tramway Museum Society have confirmed that Liverpool 869 is scheduled to move into the workshop shortly where it will receive a heavy overhaul having not operated for the last few years. It is not certain what work will be carried out, but the tram is expected to be lifted so that its bogies can be overhauled, whilst some work on the seats which are in a rather tired condition is also expected. With a reportedly long list of faults, 869 is likely to remain in the works for quite a while but it is still excellent to see positive progress towards getting this unique tram back into service. Hopefully at some point next year, there will be two serviceable Liverpool streamliners for the first time since the city’s tram system closed, albeit in different locations, although it would be nice to think that one day the pair could meet again!? 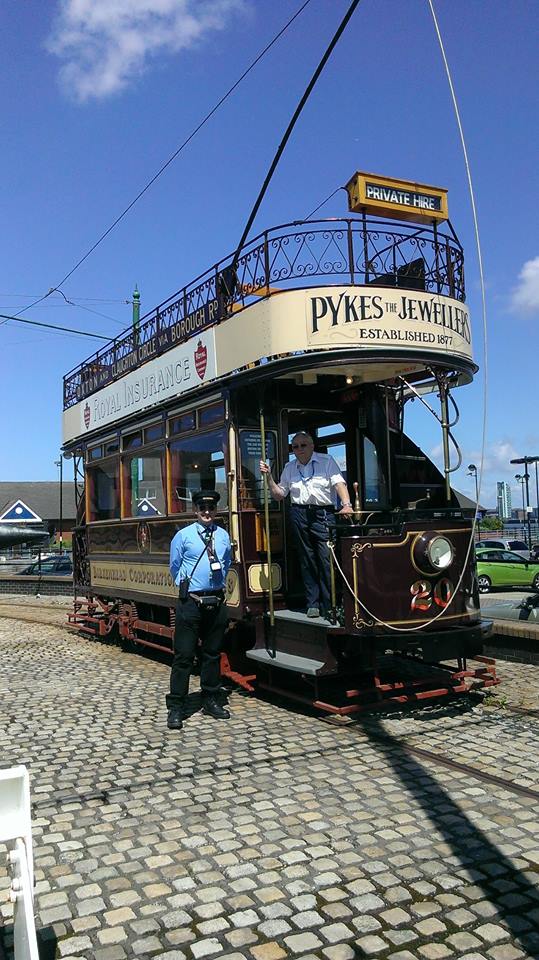 A proud volunteer tram crew pose in front of Birkenhead 20 in ideal sunny weather on Sunday 6th July; one of the tram's first appearances in service this year. (Photo by John Hewitt)