Posted on Sunday 6 May 2012 by Andrew Waddington

After an extremely rare winter appearance on February 29th, when it ran on test as far north as Thornton Gate, Blackpool Boat car 600 finally recorded its first normal passenger use on Saturday 5th May when it debuted on Blackpool Transport’s new heritage tram tours. With poor weather for much of April, this had been the first opportunity to use 600 on the new service and although the day wasn’t exactly warm, bright sunshine brought the tram onto promenade and it ran succesfully all day.

However, this wasn’t actually 600‘s first outing with passengers on board in 2012, as two days earlier the car had been used for a rather unusual private hire. The tram was chosen by female members of the Blackpool Civic Trust to form the backdrop of a photo shoot for their 2013 calendar, and it was posed for the cameras at North Pier on the morning of Thursday 3rd May. The twist in the tale is that the tram was upstaged however, as the mature ladies involved posed nude with the tram! Many organisations and individuals have compiled naked calendars after the famous ‘Calendar Girls’ story which was turned into a smash hit film and a touring stage show, and now a Blackpool tram has got involved. This isn’t the first time a tram has been used for this purpose though; many years ago glamour models were posed with Bolton 66 for a calendar shoot, although on that occasion the charter took place in the early hours of the morning. Surprisingly, 600 and its passengers posed for the cameras in the mid-morning before the tram headed back to the depot, attracting a considerable amount of attention from people who happened to be passing at the time! Thankfully when the car re-appeared on tour duty two days later, its passengers were rather more covered!

Now that 600 has re-entered service, hopefully the weather will improve so that this popular tramcar can enjoy more extensive use than it did last year. Soon it will be joined in service by sister car 604, which is now set to receive the George Formby Society sponsorship contract in place of car 602 as was originally planned. An inspection of both cars has revealed that 604 is in better condition, however all is not lost and it has been confirmed that Blackpool Transport hope to eventually carry out the required work to return 602 to running order. Hopefully this could result in a trio of Boats running in Blackpool, and with other examples of the class also operating at Beamish and Crich, the future of these cars looks extremely bright. 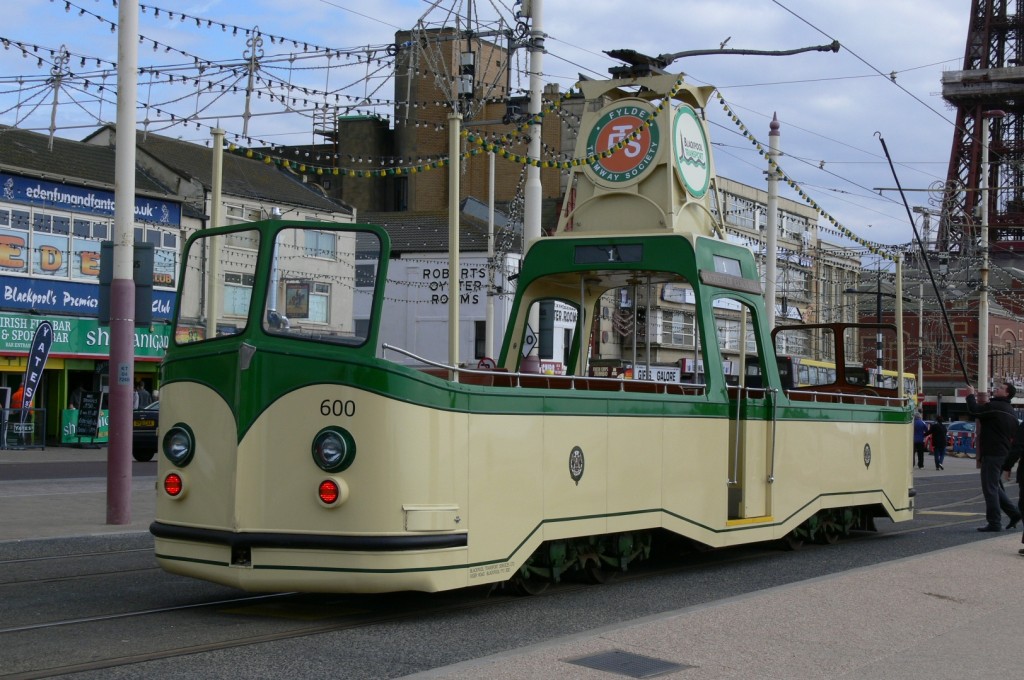 Boat 600 minus passengers (clothed or otherwise!) seen terminating at North Pier before heading back to depot on Saturday 5th May 2012. (Photo by Tony Waddington)