TMS Board respond to controversy over Leeds 602

The Tramway Museum Society have issued a detailed statement to members, explaining in greater detail the reasoning behind the recent controversial decision to turn down the offer of a large legacy to finance a full restoration of Leeds 602. The Chairman of the TMS Board has penned this letter with assistance from the Museum’s recently appointed Manager in response to the many queries he has received concerning the decision to reject the money so that 602 can be conserved in its current form rather than restored and operated.

As many of the questions posted on this website when the first announcement regarding the rejection of this legacy was issued are answered in the new statement, the key points that address these questions are summarised below. It is particularly notable that the TMS confirm that the desire to conserve 602 as it is now, due to it being perceived as being in largely original condition, is the sole reason for the money being declined and that operational factors, such as crew training requirements, were not considered to be an issue. It is also confirmed that the sum involved – £250,000 – was believed to be sufficient to carry out a full restoration of the car and that no additional funding would have been required.

One of the main concerns raised by British Trams Online readers was the fact that TMS members were not consulted before this significant decision was made. The statement explains that the TMS Board of Management are elected by the membership, and once in post it is their responsibility to make such decisions and they do not need to consult Society members. It is also claimed that the TMS is much more transparent than many other organisations who may not even report on such major decisions to supporters.

Many people have also voiced concern that this incident could have dire consequences for future funding opportunities, as it may discourage further legacies and other large donations being made. The Chairman believes that this is not the case, and that rejecting a large sum of money for what is described as an ‘inappropriate’ project will actually strengthen the museum’s cause, and their ability to attract funding from sources such as the Heritage Lottery Fund. Conserving an iconic tramcar like 602 will apparently show that the museum takes its responsibilities as a designated museum with a collection of national importance seriously, and that to compromise this would jeopardise potential funding opportunities in the future. Although the TMS have no obligations to follow such procedures, it is referred to as a “Nationally Styled Museum” and therefore tends to follow trends of those which receive government funding even though this is not the case with Crich.

The justification for carrying out an extensive rebuild on London County Council 1, a tram which remains in ‘as withdrawn’ condition having only received a repaint since arriving at Crich, is that the tram suffers from galvanic corrosion due to the contrasting materials used in its construction, meaning that it is deteriorating badly and would ultimately disintegrate without major attention. By contrast, car 602 remains in excellent condition (no doubt having been helped by various overhauls and maintenance during its years of operation at Crich, which is ignored in this statement!) and it is claimed that it ‘can probably be stored indefinitely’. Again, it is emphasised that overhauling its electric equipment ‘would involve the significant loss of historical material’ preventing future generations from being able to learn from it. Reference is made to the elaborate original internal panels which might be damaged during the process of stripping the car.

A suggestion that a document should be made available describing the role of each tramcar in the national collection and whether it should be restored or conserved as described as something that ‘might be possible in a reasonable timescale’, although a request for this to be updated every two years is dismissed as being impractical.

Finally, perhaps the most bizarre part of the statement refers to other museum artefacts that are considered as inappropriate to restore, such as the Mary Rose, although the similarities between a battleship which spent a few hundred years on the sea bed and a complete preserved tramcar are rather few and far between! A more relevant comparison is made with the original Stephenson’s Rocket steam locomotive which is preserved at the Science Museum in London, with working replicas used to recreate the experience of the engine being operated.

At least the TMS have now made the effort to respond to the questions raised by their recent shock announcement, although it is feared that the damage may already have been done. It remains to be seen what effect, if any, this more detailed statement will have on the opinions of the many people who opposed the decision to conserve Leeds 602, but hopefully this matter can soon be put to rest and the museum can look forward to ending 2014 in a more positive way after attracting so much negative attention of late. 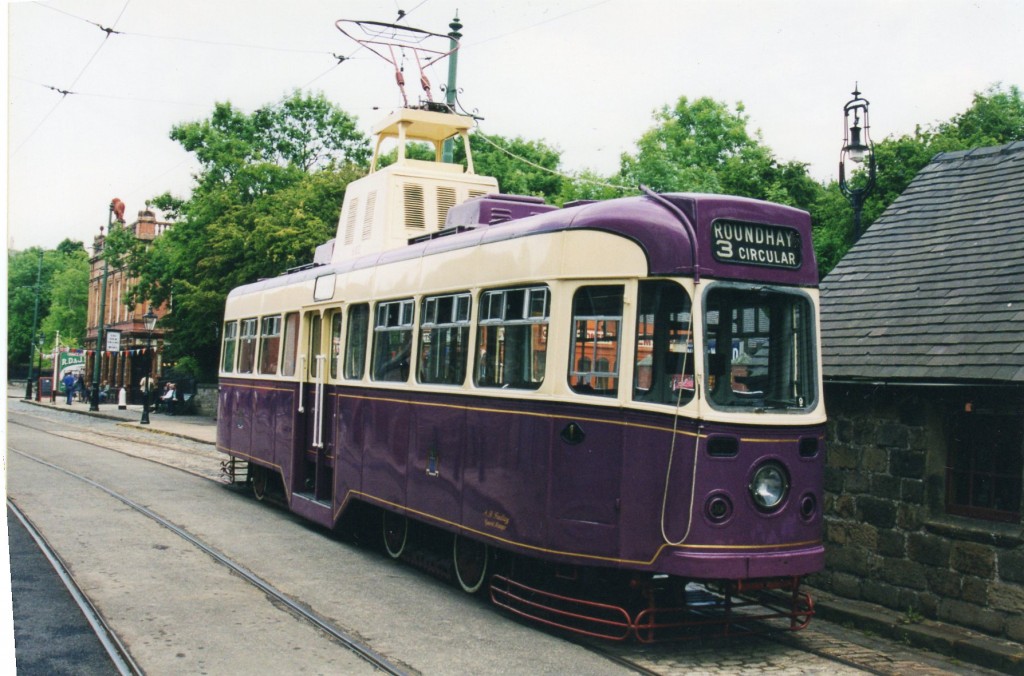 Seen in happier times, Leeds 602 waits to load passengers at Town End during the 2003 'Tramathon' event. The tram had been made available for restricted use that year to commemorate its 50th anniversary. (Photo by Tony Waddington)

30 Responses to TMS Board respond to controversy over Leeds 602