This is your one stop guide to when and where you can ride on heritage trams in the UK and Isle of Man. This weekend sees the next bout of heritage tram operation in Blackpool with a two days of fun on Sunday 4th and Monday 5th May whilst most of the rest of our heritage tramways are in operation with the Douglas Horse Tramway now only 10 days away from their first operations of the year.

Operating hours: Services run from Taylor Street Museum at 1300 and then every half hour until 1630, returning from Woodside Ferry at 1315 until the last possible return at 1615. A two tram service will run on Easter Sunday and Monday.

Sunday 4th & Monday 5th May with a 3 tram service on each day. Full details of the trams running can be found at http://www.britishtramsonline.co.uk/news/?p=7351

Next special event: The Best of Sheffield – 17th-23rd May

Tuesday 6th-Friday 9th May and then Mondays-Fridays until Friday 23rd May – Yellow timetable. First tram Seaton at 1000 and then every 30 minutes until 1600 with returns from Colyton starting at 1030 until the last departure of the day at 1630.

The following services will be running during April/May: 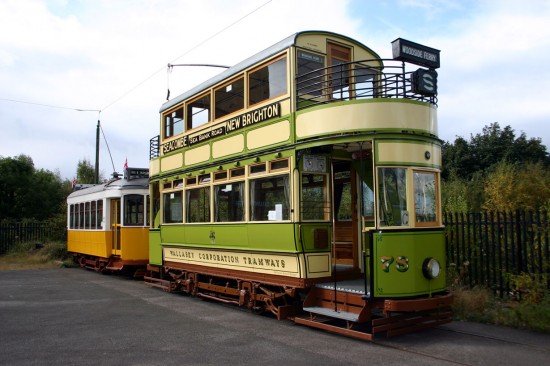 Two of the Birkenhead Heritage Tramway's trams are seen at rest during the Bus and Tram Show in 2009: Wallsey 78 & Lisbon 730. (Photo: Gareth Prior)