Details of the plans for Blackpool’s heritage tram service over the imminent May Day Bank Holiday weekend have now been announced, with a three-car service due to operate on both Sunday 4th & Monday 5th May. With a similar pool of cars available due those which ran at Easter, just two weeks earlier, this may not be quite as exciting although the first passenger journeys by a Centenary car in 2014 should provide extra interest.

It may be recalled that originally, no heritage trams were expected to run at all for the early May Bank Holiday; however the Fylde Tramway Society have subsequently stepped in to finance the operation of a three-car service on two of the days. Saturday 3rd May will remain devoid of heritage cars due to other Society events, including a visit to the Starr Gate depot for pre-booked ticket holders, and the FTS’ Annual General Meeting, although one tram is expected to be used to convey members to the latter event. To thank the Society for its support, Blackpool Transport are offering heritage day tickets to FTS members at half price on production of a valid membership card.

Unlike Easter, no advertised change-overs of trams are planned although this may well happen if the weather or other factors dictate a swap; likewise, all of the listed vehicles are of course subject to availability and open toppers may be substituted in the event of poor weather, with Brush car 631 and Balloon 717 believed to be on stand-by in case a change of plan is needed. The provisional operating schedule, however, is as follows:

Timings of the Fleetwood trips will be the same as at Easter – 1036 from North Pier in the morning, and 1725 from Pleasure Beach in the afternoon. At other times the three trams will run as specials, directed around by the Heritage Tram Supervisor stationed at Pleasure Beach. A connection will be provided between the tram(s) on the morning tour and the other car(s) in use at Pleasure Beach at approximately 1214.

Please note that, due to clearance issues with the bollard which scraped 648‘s fresh paintwork last year, Centenary cars are currently banned from running to Fleetwood Ferry and therefore 648 will reverse at Ash Street on the Sunday evening tour, leaving 706 to continue to the Ferry alone. In order to ensure that a Centenary car is available on the Sunday to free up the extra conductor required for 272+T2, car 642 has now been transferred to Starr Gate depot along with its sister, and will be available as a reserve car for the weekend. This seems a little odd as 642 would have undoubtedly added a bit of extra pizzazz to the weekend’s output; hopefully now it has presumably been commissioned it will see some use at a later date if it is now required first time around. 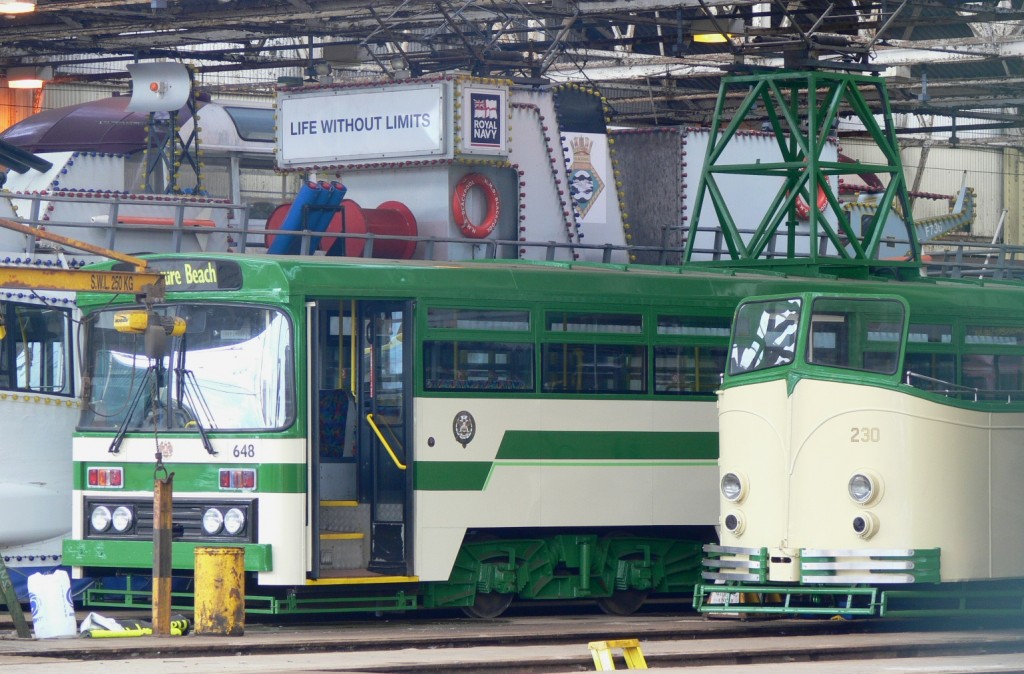 Since being repainted last year, Centenary car 648 has spent most of its time here - inside the Rigby Road depot - so its appearance next weekend should be a coup. Here it is seen alongside Boat 230 which is also due to run on the May Day Bank Holiday. (Photo by Andrew Waddington)