Thursday 27th March saw the first of four planned days of shadow running in Rochdale town centre ahead of the opening of the line to the public on Monday 31st March. As with previous shadow running on Manchester Metrolink the LRVs are running in service as far as the current terminus of Rochdale Railway Station where all passengers have to alight before the vehicle continues its journey into Rochdale town centre.

Trams from Manchester are now using the outbound platform at the Railway Station stop for the first time (previously all arrivals into Rochdale used what is now the “wrong” platform here) so for those of you into “new track” and can’t wait until Monday morning you can get along to Rochdale now to experience the curve from in front of the railway station into the tram stop.

The first service from Rochdale Town Centre on Monday 31st March is due to depart at 0553 having arrived from Queens Road Depot, where it is due to leave shortly after 0500. Services will operate every 12 minutes and will run to and from East Didsbury as now. 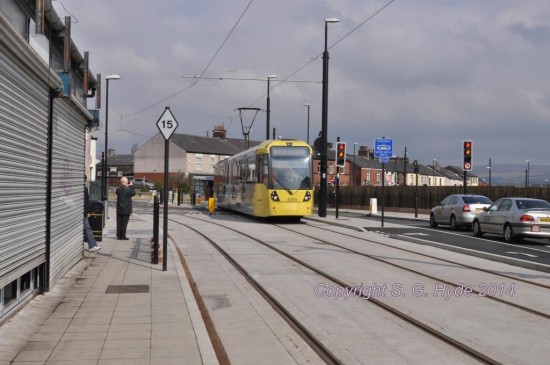 This view is on Maclure Road at the junction with Drake Street and shows 3009 returning from the town centre. Does anyone recognise himself taking a photo? (Photo: Steve Hyde) 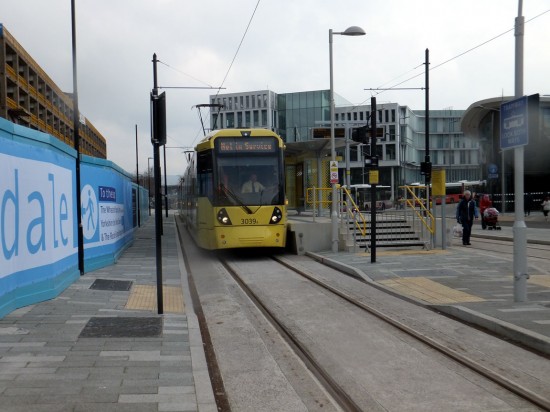 3039+3030 stand at Rochdale Town Centre stop ahead of departing with a journey through to the Railway Station. (Photo: Ken Walker)